Turin before Easter spells one thing only – chocolate at its most delectable and daring, whether we’re talking taste or window displays. Easter eggs that look more Faberge’ than edible. A city where chocolate is fashion not just fine food.

I was in Torino for four days last week and snapped some of what this incredible city has to offer the Slow Food advocat and chocoholic (ciocco dipendente in Italian). My snaps mix cafe life with street scenes to anchor Torino and its epicurian delicacies in the food banks of my mind. 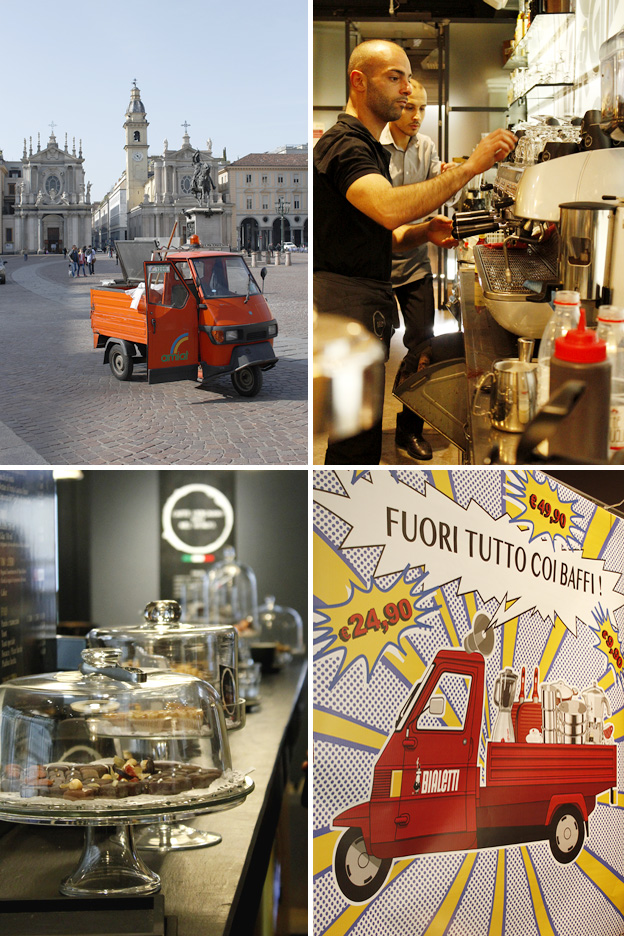 Torino, for all its industrial fame – think FIAT – has a stunning city centre and a very leisurely, relaxed atmosphere; surprisingly it appeared to have none of the businesslike stress of nearby Milan. I think it far more glam in a quiet, understated way than Milan. Turin isn’t hot on the tourist trail which means the city has its own raison d’être as well as hosting cultural events of international scale – the Torino Jazz Festival takes place end of April and its Chocolate Festival – Cioccola To’ – is end of the year. Often we visitors to Italy end up in the usual suspect cities of Firenze, Roma, Venezia and so on, missing the unique offers of other urban centres. Torino has its own deep-rooted history and an unsung complement of fascinating museums, sights and street life to rival more famous neighbours. 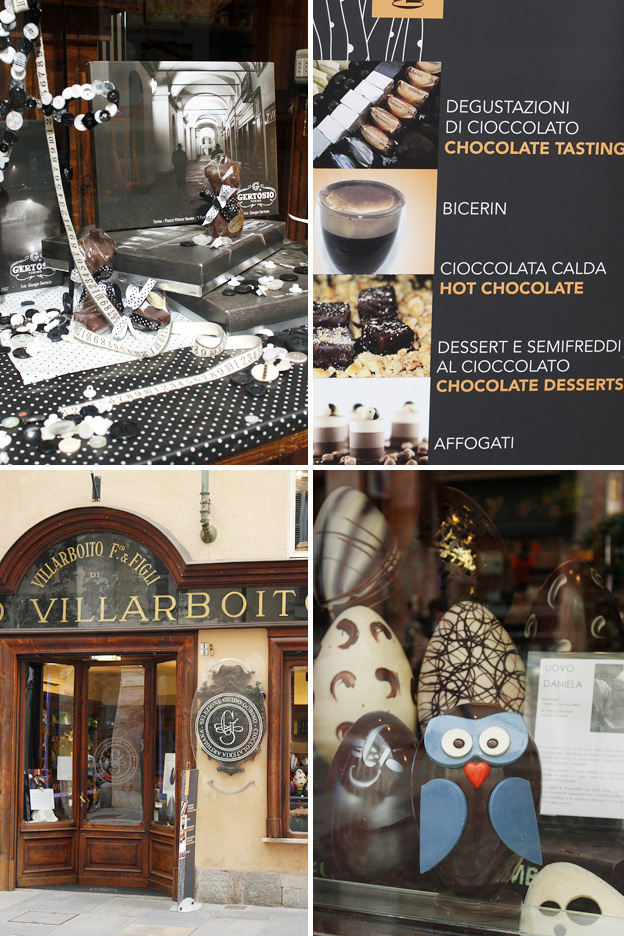 I had no preconceptions of Torino, not having had time to read up before we went. What a complete surprise the city centre proved to be. Before you think this is some paid-for travel advisory, it isn’t! I was just glad to see winter end on an impromptu hop to Torino, which I’d have dismissed in the past as dour, dreary, cold and northerly (my instincts drawing me to the southern Med usually). It does have overtones of Switzerland and France, and many of its pasticcerie and cafe’ interiors reminded me of the art deco or fin-de-siècle settings you find in Viennese eateries. Outside, the enormous squares were all baroque grandeur with embellishments galore recalling the city’s splendour as the seat of the Savoia royals. 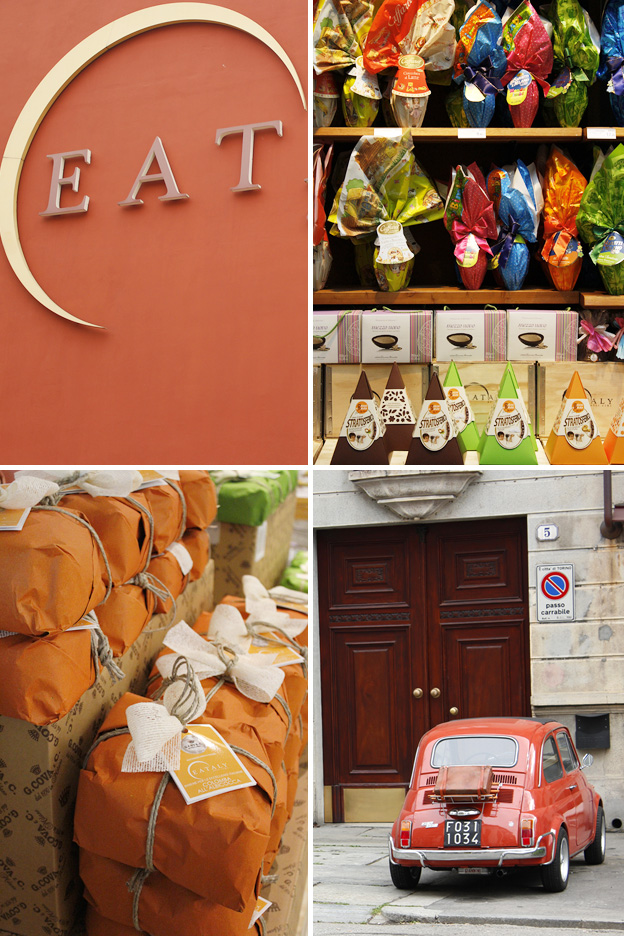 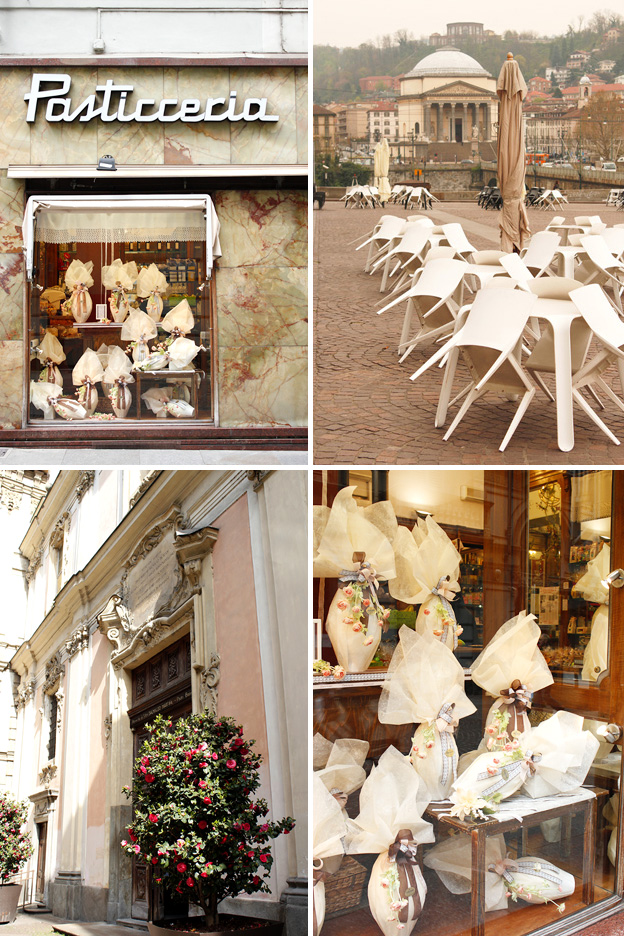 Virtually traffic-free as its wide streets are mostly pedestrianised in the very centre, though you do have to mind the bikes weaving around you, it’s easy to negotiate on foot. Strolling its long French-style ‘vie’, with glimpses of snow-covered Alpine peaks in the distance, I sauntered from one enticing cioccolateria window through the open door of the next cafe’ every 30 metres or so. I am not sure the saying should be ‘Nespresso. What else?’; but perhaps ‘Torino lentissimo. What else?’ The city’s vast squares were for the most part very quiet, becoming busier on the Saturday. We’re still ‘fuori stagione’. We were there two weeks before Easter weekend and as you can see in the photos, few people were outside sipping coffees or aperitivi although spring warmth was penetrating the cloud. 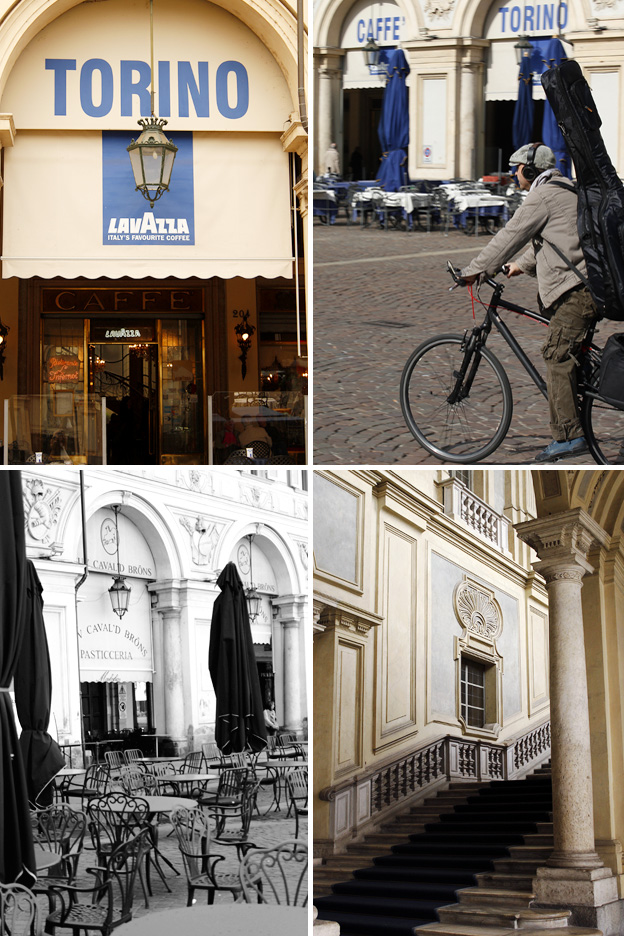 I knew that Torino was home to FIAT but I’d never really known about its chocolate fame until I arrived. I’d considered closer to home Modica, in Sicily, a sufficiently ancient seat of chocolate making not to bother with seeking out other ciocco dipendenti pilgrimages. But you simply can’t avoid chocolate in Turin which boasts chocolatier licences dating back to the mid 17th century. One word you find linked intrinsically with cioccolato in Turin is ‘Gianduia’ or by its other spelling ‘Gianduja’; it’s a blend of chocolate and hazelnut paste, a renowned speciality of the city and Piedmont region. It’s thought to have seen light of day in the Napoleonic rule of Turin (1796-1814) when cocoa imports shot up in price and the chocolatiers needed to water their precious supply of the raw stuff down. 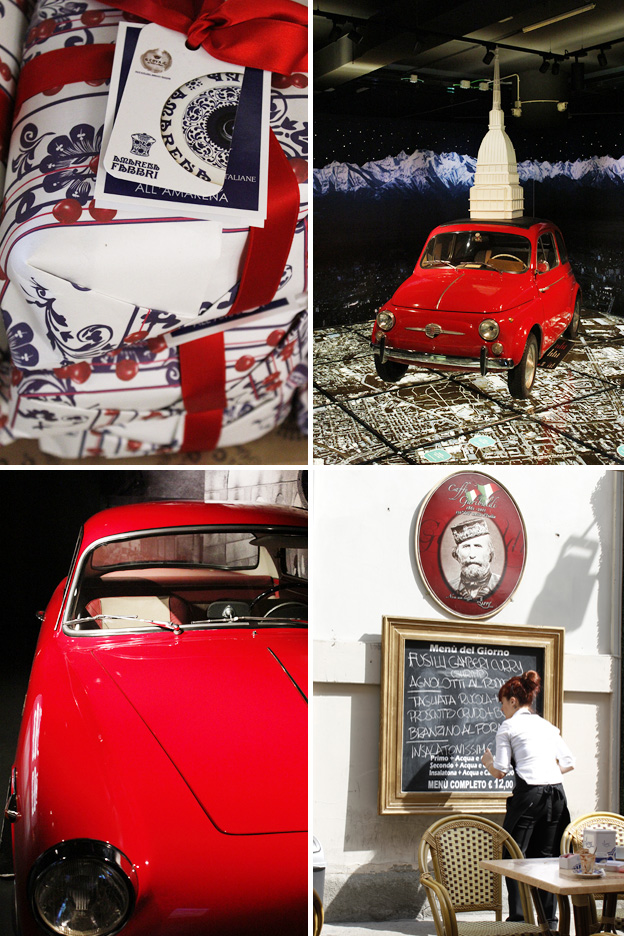 As a very dark chocolate fan myself, I am not uber keen on milkier chocolate with nuts, nor the gianduia offspring Nutella. However, when in Turin, do as the Torinesi…and all that! I did try the Grom ice cream parlour Gianduja gelato and went back for more! Another Turin chocolate invention that went down well was the Bicerin, a hot chocolate mix of cocoa, coffee and cream.

Turin and Piedmont produces around 40% of Italy’s chocolate production. Famous producers like Ferrero Rocher are cocoa industrial giants just as associated with the region as FIAT. Smaller artisan producers still exist and this guide here and this extensive write-up here on the chocolate outlets and types will help the cognoscenti seek out the real stuff from the factory-farmed chocolates. I will have to return with son in tow as he’s the chocolate dipendenti and connoisseur, and he’d have the determination to tackle a rigorous chocolate tour.

If chocolate’s not your thing, be aware that Torino can claim to be the heart of the Slow Food Movement having hosted its first big, now biennial event, the Salone del Gusto. This is a city with some seriously good (and well priced) restaurants.

Turin: my top 5 Food and Other Sights

1. Torino Chocolate Tasting tour:
Use this as your guide to the main shops in town. And this guide takes you through the myriad chocolate types in great detail.

2. National Car Museum, Lingotto suburb
Take the Metro to the end stop Lingotto and pop out right next to the old FIAT factory with its iconic typography and architecture. Lingotti is Turin’s car making suburb. A short 10 min walk brings you to the recently renovated and wackily designed Car Museum with its extensive collection laid out following the social history of the automobile. Allow at least 2-3 hours. Plenty to see and photograph.

3. Mole Antonelliana & the National Cinema Museum
I didn’t make it here, but one top of the list for my next visit. The rare and extensive film & cinema history collection aside, the building itself is worth the visit; it’s Turin’s most iconic landmark – a strange pinnacle of a tower which you can visit as a city viewing platform on a separate entrance ticket if you like. (My photo of the Fiat 500 in red has the ‘mole’ on its roof).

4. Palazzo Madama & its exhibits and exhibitions
We caught an Eve Arnold exhibition in this palace. It has parts dating back to the 1st century A.D as it incorporates Turin’s Roman gate. The permanent collection is an eclectic range from the Baroque period and back, plus incredible art works.

5. Eataly
A chic, artisanal-style market hall / foodie shopping concept cum eateries all under one roof, again in the Lingotto suburb (just 100 m from the metro exit, past FIAT). We had a very substantial snack lunch perched on a bar stool at one its themed counters – vegetarian in our case, but you can choose pesce, carne, insalate etc. With its own bookshop and cookshop and food corners of every flavour, it’s easy to while away a good two hours in this out-of-town Eataly. A smaller store is in the centre on Via Lagrange.
NB. I’ll be writing up Eataly as a follow-on post as it deserves that much space it was so enticing!