Tomato and zucchini soup, both fragrant classics of summer dining. Two simple summer soups stunningly served together to impress…and to save you choosing! The dividing line doesn’t need any tricks of photography or complex sleights of hand either [read on]. 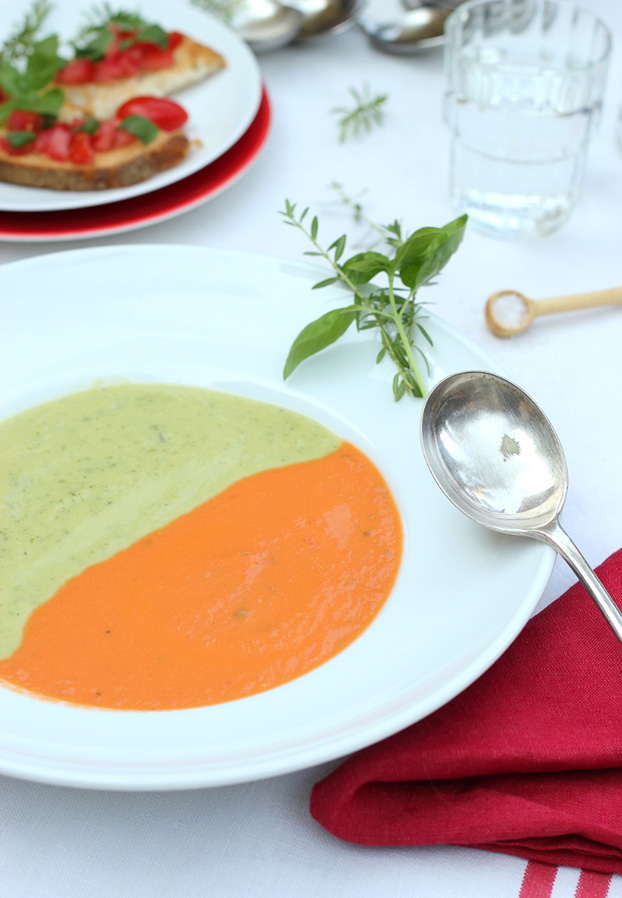 Tomatoes and zucchini rule supreme all summer long in Malta. Tomatoes are now at their peak and most succulent and fragrant. I eat them every so often straight from the fridge they’re so tasty. Zucchini, an all-year-round vegetable, with summer varieties edible as crudités or as a carpaccio with a squeeze of lemon, so sweet they are right now. We’ve made mixed veg grilled salads with them to the hilt so I opted for a summer soup duo this weekend for a change; not served piping hot, but also not like a Gazpacho with ice cubes either. I am just not keen on cold soups despite the heat that’s building as we enter the second week of July. 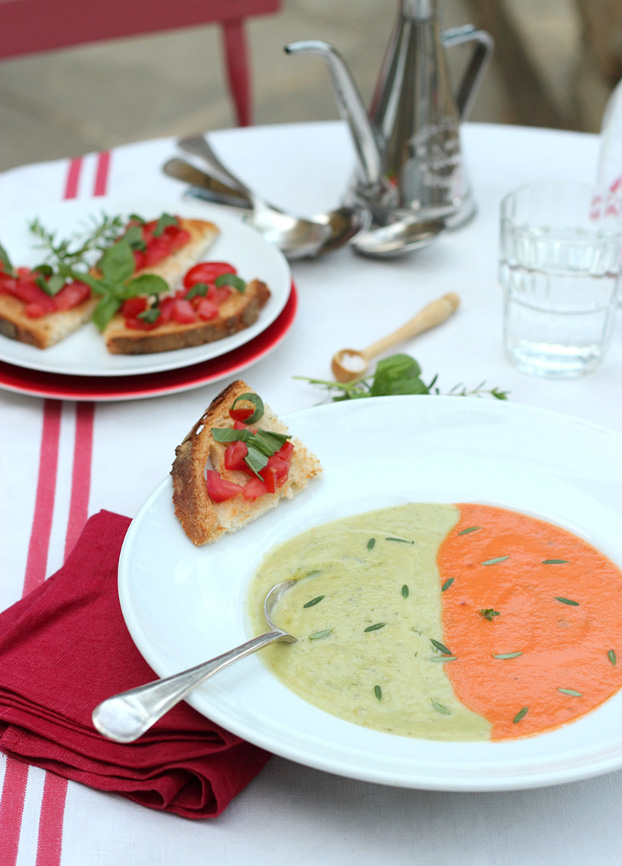 Yin-Yang needs some explaining for what seems humble tomato and zucchini soups. My son, quick as a flash gave it this inspired name. When I served this up first time, without thinking too much about it, the ladles of tomato and zucchini curled around in the soup bowl embracing each other in perfect yin-yang shape. My next servings didn’t quite ‘bend it like Beckham’ or yin-yang but nearly met at the circumference. I had intended dead centre, but bendy is better I think. To achieve a meeting point, bent or near straight, simply make one soup thicker than the other and ladle in the thicker soup first from one side of the bowl [don’t dollop straight in the middle, in other words]. The thicker soup takes time to spread out, so quickly as you can, ladle in the thinner (tomato in my photos) and it will edge up neatly to the other.

I did think about rigging up some strong divider, perhaps of stiff cardboard, down the middle and might try that next time to achieve a perfect central line. If chilling the soups, you could arrange soups in the bowls cold and then reheat each in a microwave. I’ll post updated photos here if I get a better bend or straight line!

This soup duo got the thumbs up from my men even though younger man is not known to eat tomatoes (raw ones anyway). So praise indeed that he loved this. The herbs give them a mellow richness and go particularly well with the zucchini; tomatoes, if wonderfully ripe, don’t need the basil but I can’t bear not to eat basil with toms when it’s growing in abundance in my pots. The soups themselves are so simple to make and can be easily reheated next day. Together, they can be served to impress at a dinner party. Their yin-yang look should prove a talking point. 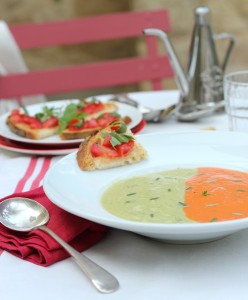 Print
Prep time
10 mins
Cook time
30 mins
Total time
40 mins
A flavoursome summery soup. Amounts of the vegetables are approximate as I just use up what’s left in the fridge and add any liquids in stages to achieve the right consistency. I’ve given approximate veg quantities therefore to serve around 6 portions. As the methods are more or less the same for both soups, I written them together.
Recipe type: Soup
Cuisine: Mediterranean
Serves: 6
Ingredients
Method
3.2.2885
« ‘Drunken’ Vin Santo fig clafoutis
Mint tea & peach granita »