On the table finally, rather than relegated to my kitchen surface, the tagine pot gets a well-deserved outing. 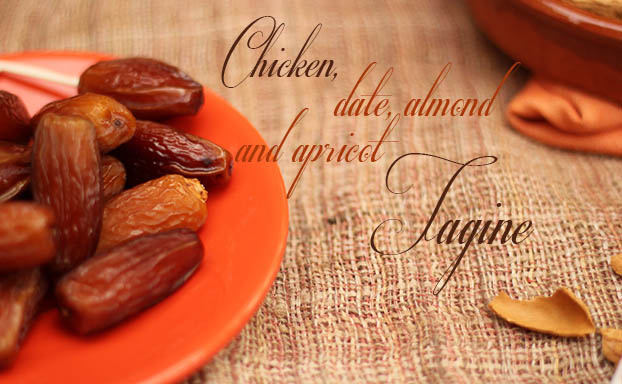 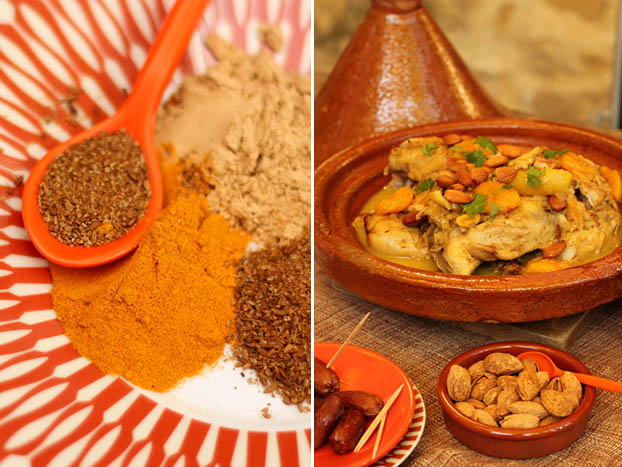 “Why don’t you use the tagine pot, mum? Is it just for decoration?” J was right. The earthy-brown, conical tagine pot is used for anything other than serving tagines. It’s a hidden place to defrost things out of sight and scent of the Bistro cat. It doubles up as an overflow bread bin and fruit bowl. Once every three years, it sees the light of day on the table with a casserole in it; still rarely a tagine. Time then to dust it off (literally) and put it to perfect use – for Sunday lunch. 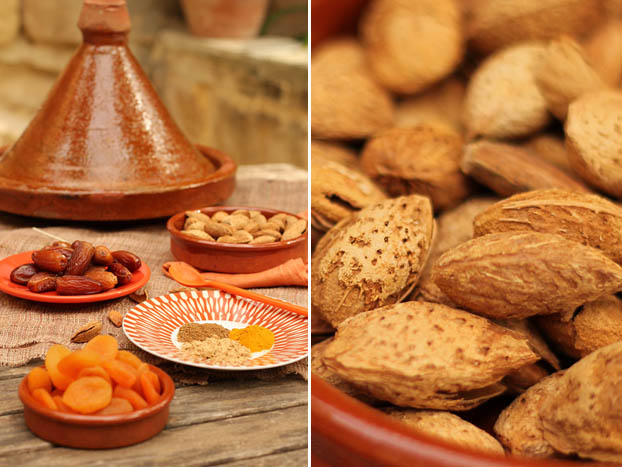 A raid of the store cupboards turned up the spices to give the chicken a pep up: cumin, turmeric (poor man’s saffron!), and ginger. I happened to have fresh root ginger too. Chick peas? Not this time. I opted for a sweeter tagine with dried fruits since the San Martin bag was still to get through! In fact, as I cooked this the bells ringing out this saint’s day were deafening, what with fan oven and cooker hood noisily blasting along as well.

I made so much tagine that there’s two meals’ worth of it. Ideal to freeze for a time-poor weekday evening. Once reheated, a tagine’s spices and flavours deepen to perfection. Come to think of it, I can use the tagine pot as my defrosting place, appropriately for once!

The night before, or at least three hours before cooking, marinate the chicken pieces (skin removed first). Mix the olive oil, spices, salt and pepper and juice and rind of lemons. Coat the chicken, tossing pieces around in a bowl, then leave in a shallow dish, covered, in fridge until ready to cook.

Preheat oven to 190°C, adjusting racks to allow for tagine pot, if using. Heat an extra 2-3 tbsp olive oil in a solid-based frying pan or wide casserole. Test oil is hot enough by dropping in a bread crumb; if sizzling, drain off the chicken pieces reserving the marinade. Brown the chicken in batches on both sides. Set aside. Reduce heat, and then brown the onion in the same pan. When softened, remove the onion and place both chicken pieces and onion along with remaining marinade in the tagine pot (or wide, lidded casserole, if tagine pot is too shallow / small for the amount you’re cooking). Add stock to almost, but not quite cover the chicken; then toss in almonds and apricots, reserving a few to garnish on serving. Cover with foil, casserole lid or tagine pot top if your oven has the height! See note below about tagine pots. Cook for 45 minutes, remove the tagine and turn chicken and baste with the sauce before returning to the oven. At this point, ladle out around 2 tablespoons of the sauce and add a teaspoon of arrowroot or cornflour, mixing up well – set aside for now and get on with the couscous.

Date Couscous: Place couscous in a heat-proof bowl. Dot in butter. Add the two cups of hot water or stock. Stir briskly with a fork until butter melts. Cover with a tea towel and leave for around 5-10 minutes depending on the instructions on the couscous packet (brands vary – some are quick cook). Check to see if it’s soft (some bite left is ideal), and fluff up with a fork. Fork in the chopped dates (you can use sultanas if preferred).

Final stages: When the tagine is done, remove from the oven and place the chicken on a warm place. Quickly stir the arrowroot or cornflour mix into the sauce, return the chicken, baste in the sauce, cover and place back in the oven at reduced heat (120°C). At the same time, place the couscous in the oven, tea towel removed and the couscous now covered with foil, for around 5-10 mins to heat through a bit.

Serve tagine sprinkled with fresh coriander or parsley, some flaked or whole almonds, and accompanied with the couscous and extra dates.

Tagine pots
Some pots are meant to be decorative and are not really ovenproof. Check when purchasing. If you have a rough pottery one like mine, do soak for a good 24 hours, submerged in water, before using if newly purchased. This will ensure it doesn’t crack. Mine does chip easily, but it was nice and cheap from a Moroccan import shop in Malta. Expensive ones, ceramic, not clay-earthenware, are more durable.