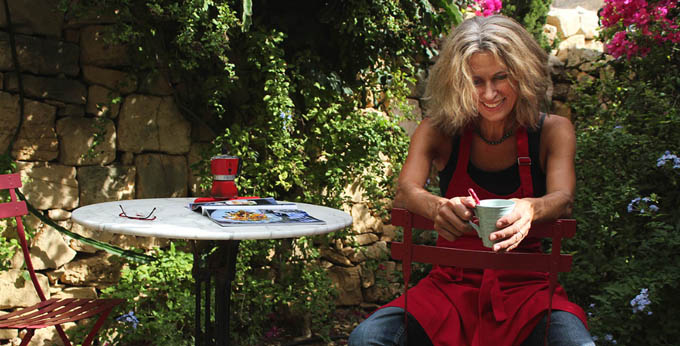 That I’d start a Mediterranean food and recipes blog? Not something I’d have thought I’d do a decade or so back. And if my mum is reading this, she’ll have a wry smile on her face. In a last ditch attempt to get me into the kitchen to cook rather than for my rostered stint at washing up, she gave me Delia Smith’s Complete Cookery Course. This Delia tome was given to probably thousands of new undergrads like me in the early ’80s by mothers worried their offspring wouldn’t eat properly for three or four years.

I would like to say I was fairly competent when I bothered to cook, but as mum was such a prolific cook and proficient maitre d’ of our family restaurant, I had no need to butt in or be tempted to have a go. Dad managed a large veggie plot, bee hives and orchard at our home in Hampshire when he was between flights in his job with B.A., and so she had volumes of homegrown produce to deal with as they cropped. Pickling, preserving, jam and chutney making all featured in our family life. I dabble in these, but for fun. For them, it was a way to eat healthily, save cash and not see anything go to waste.

How times and I have changed. I’ve spent around 30 years making a living writing. Trained as a journalist, I worked with the European Commission in London before marrying and moving to Malta in the early 1990s. When I met my husband-to-be in London, he was none too impressed with my potential as a cook: I had a bunch of wilted parsley in the fridge, nothing more!

Malta presented all sorts of assaults to the senses and challenges to daily life. Back then, we had no large supermarkets, and just doing the weekly shop meant allowing a good deal of time to ‘queue’ while village women nattered away buying small quantities of deli goods. For them, the village grocer’s was (correction: still is…) a mix of counselling service, news-stand, social club, child-minding service, and only last, a place to buy food. I came to realise that the Med’s approach to food was about being social from the time of purchase, not just at the stereotypical long, family weekend lunch. Time shopping for and chatting over produce was part of the ritual appreciation of food too.

Slowly, I learnt to work out what products could substitute items like crème fraîche (who needs it anyway?) that featured in my cook books written for the UK market. I learnt also to change my planned menus on arrival in the shop when what I wanted wasn’t available or other, bountiful and in-season produce was far more tempting. It was a learning curve, but a good one. Now, I eat far more healthily and don’t possess a microwave. Meals are cooked for the day to live the day. One day at a time. Less planning, yet more pleasure, in the whole family food management thing.

A real volte face then from 30 years ago. Red Bistro is the virtual parallel catering career I could have had if I’d opened up Delia at 18 rather than let her jacket fade on the shelf. I’m just glad mum’s around to watch this new ‘career’ as (virtual) bistro owner and chef take off!