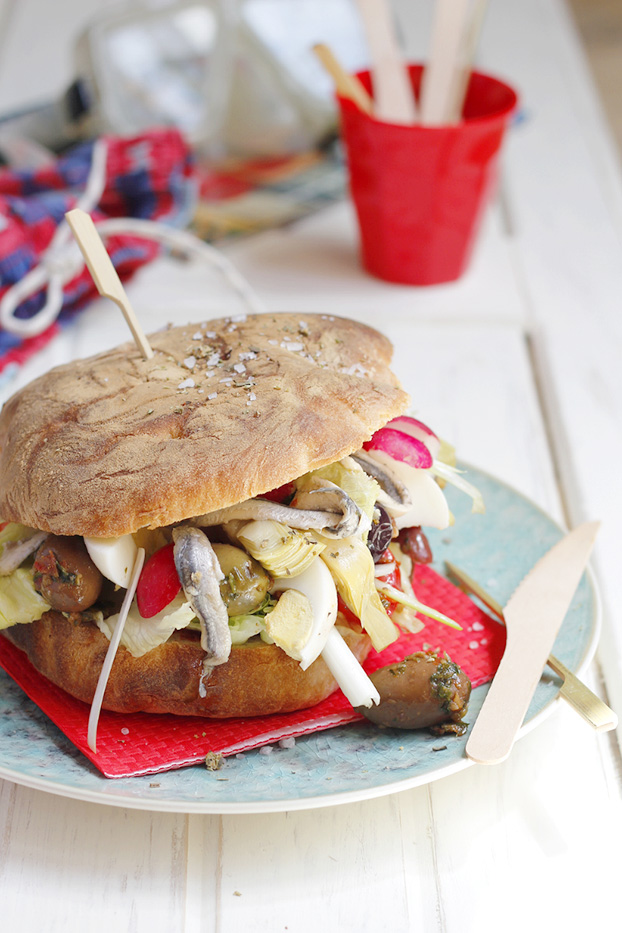 Pan Bagnat, a seafoody kind of snack in a bun. Across the Mediterranean, each country on its shores has its own sort of split open bap, ciabatta, ftira (Maltese), baguette, pain, pane or pan, as in this case. Whatever shape the dough comes it’s designed to hold a medley of fish and salad ingredients. I’ve named this after the Marseillaise or Provencal Pan Bagnat as I like the way its rhymes with ‘bain’. It is ‘drenched’ (well, not quite literally) in olive oil inside, so perhaps that was intended when it was named. We eat it as our go-to snack after a Sunday summer swim, so bain is appropriate in more ways than one. 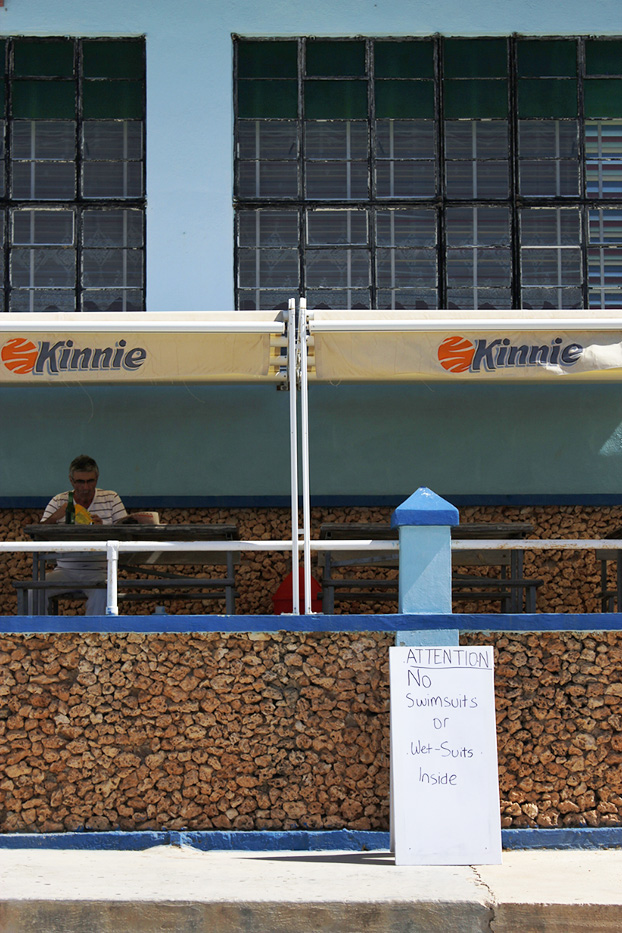 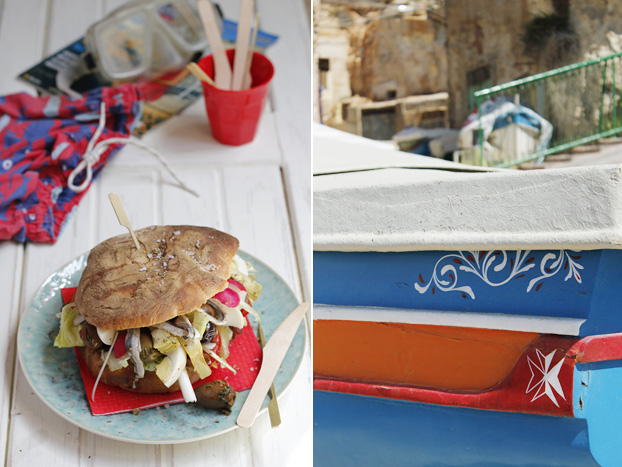 A quick breakfast last Sunday and we headed down to our local patch of coast, Ghar Lapsi, for a dip and sunbathe, followed by a beer and ftira {Maltese ciabatta with tuna, tomato and giardiniera filling}. Beyond 11am, it’s impossible to sunbathe, although I’d like to up the tan on the midriff! Gilbert’s bar is 15 metres from the water’s edge so we take little persuading to hole up under his sunshades as soon as we’re dried from the snorkeling dip. Not that he’d mind us wrapped in towels. It’s as informal and fuss-free a place as you can get, and does what it says on the tin – serving hearty and homely meals and snacks to locals and increasingly more tourists who wash up in this out-of-the-way stretch of coast. 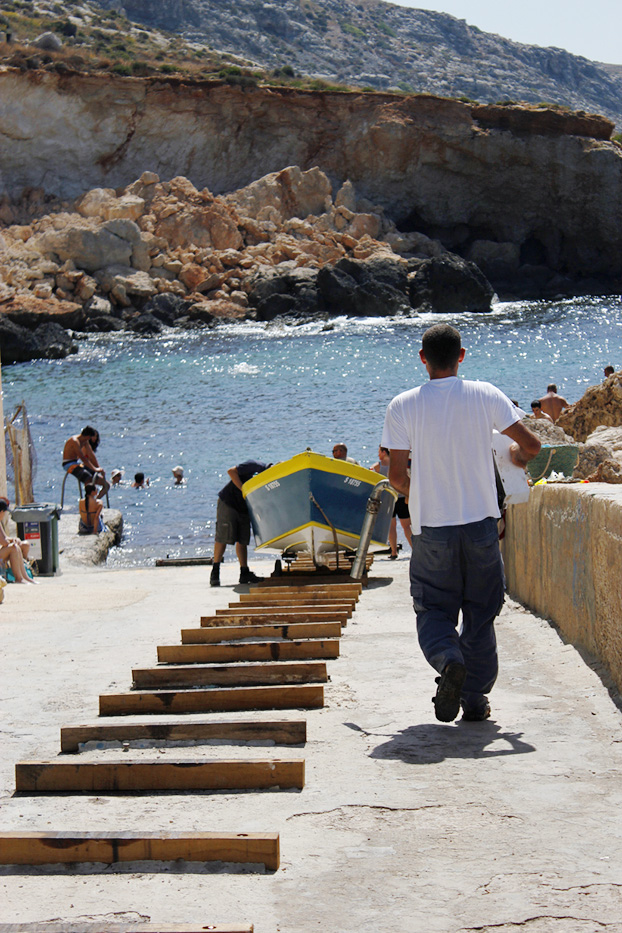 We’re intending to spend an evening there soon, but since January, we’ve whiled away Sunday mornings at Gilbert’s (a.k.a Carmen’s Bar, to use its proper name, though I have no idea who Carmen is or was). Gilbert revamped it over late spring and the last time we went, he was sporting a waiter’s ‘uniform’ of beige and burgundy. I just hope he’ll be happy with soggy swimmers even if he does smarten up the joint. The neighbouring cafe’, a few metres further up nearer the carpark, had a sign out saying strictly no wet bathers to pass its doors! 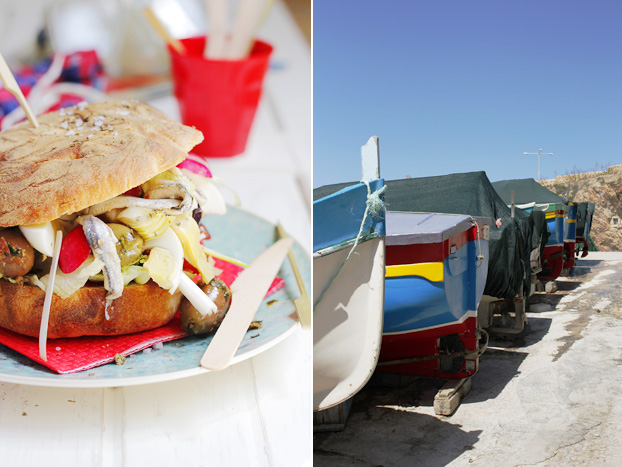 A Maltese ftira – sometimes with a hole in the middle – is more of a meal than a bap would be. It can vary in size and even be a substantial mini loaf, as mine in the photos was. We’re talking serious bread to challenge the gums: a crisp crust that flakes everywhere, and soft, slightly chewy when fresh, and airy inside (you can see the yeast bubble holes).

This pan-bagnat was rustled up with some store cupboard items. I just cut open the bread, smeared it with some tomato paste, drizzled on quality olive oil and then layered with tuna, anchovy (I used alici, which is akin to anchovy; a silvery fish but less salty), various crushed black olives in herbs, hard-boiled eggs, and lots of salad items. I suppose a pan bagnat or typical Maltese tuna ftira is much like a salad Nicoise in a crusty bap. Great summer snack pre- and post swims, and ideal picnic fodder too. It’s the Mediterranean’s all-day-breakfast I guess. 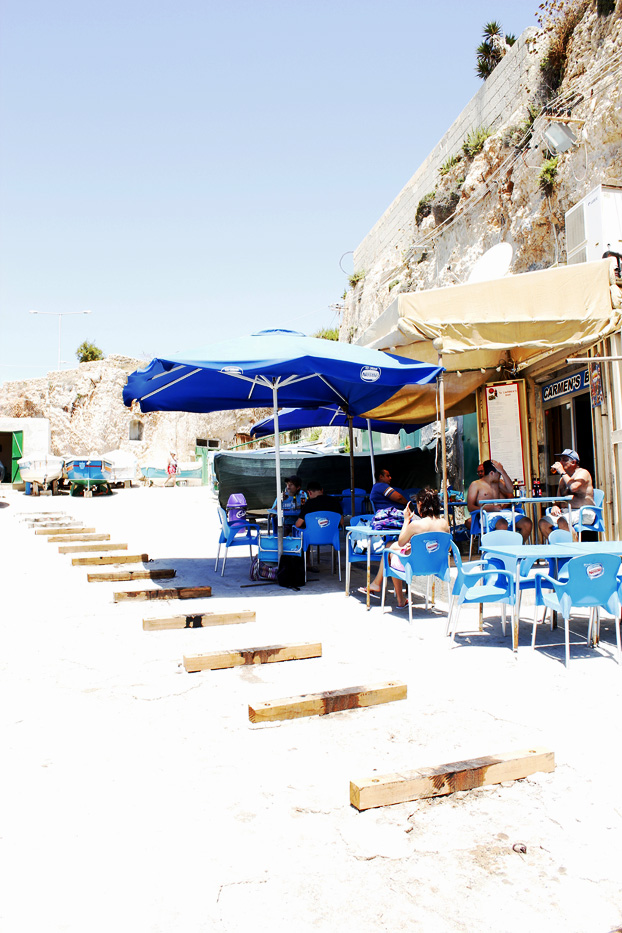 As you see in the photos, this is a mean feast ‘sandwich’ and too big to squish down to eat. It’s a messy affair; ideal for al fresco munching as it will spill all over. I worked out that hollowing out the bread (a crusty cottage loaf of UK style will be just as good) and filling the centre with the salad fish filling makes it like a Nicoise served in a loaf. The tomato paste and olive oil will drip down nicely in the the loaf making it a tasty accompaniment. Where there’s a will there’s a way with gum defying Mediterranean breads!