There are of course numerous very old and established focaccerie in Palermo. Only one though is a name in itself: L’Antica Focacceria San Francesco. 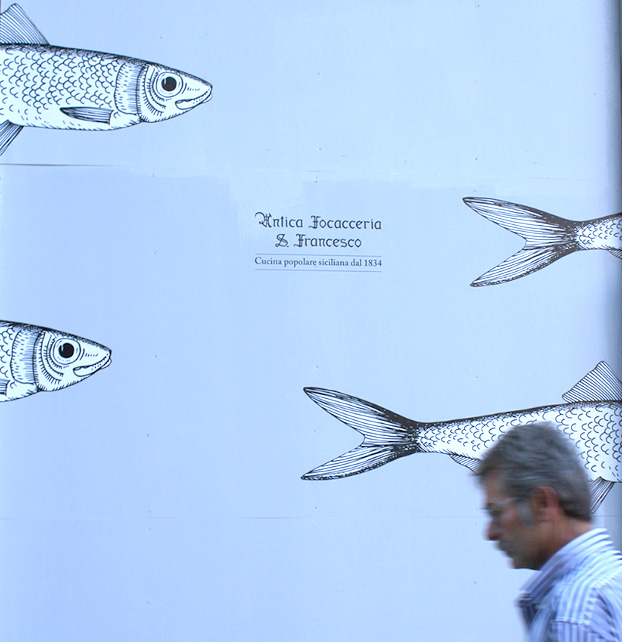 Tourist trap or devotee slow foodies’ haunt? A place locals frequent or one for Lonely Planet route-plodding foreigners? We dropped by last Sunday after a 13 years absence to find out. The crowds alone tell a story… 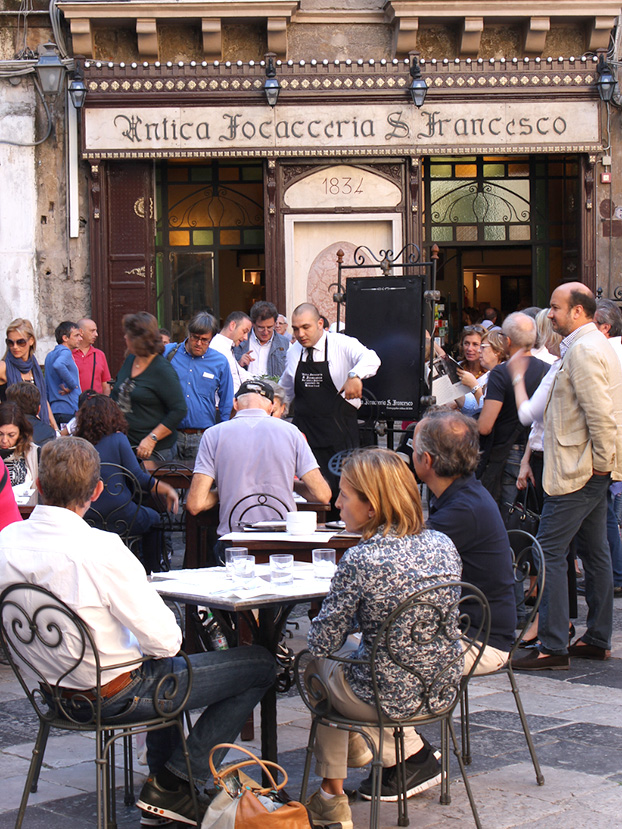 We knew the place wouldn’t be as quiet as last time we visited back in July 2000. Even then, it was a key entry in our Lonely Planet guide to Sicily. I took the 13-year-old edition with me this time too, although we relied more on TripAdvisor and Google maps than any defunct book. Googling the place brings up a lot of mentions in British newspapers like the FT, Telegraph and Times. There’s been a Brit-pack (or rather over-50s, well-heeled independent British traveler) flow to Sicily in the past couple of years or so thanks not only to near blanket coverage in those papers, but also to Italian chef in the UK Giorgio Locatelli. When he’s not writing about his love for Sicily (note that he’s originally from near Lago Maggiore), he’s to be found on BBC TV programmes such as Sicily Unpacked filmed alongside art historian Andrew Graham-Dixon. 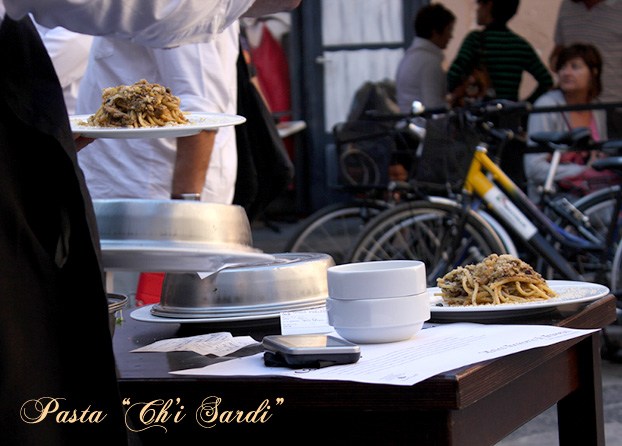 I watched the three Sicily Unpacked episodes last year, which turned out far less touristy a view of the place than I’d expected. The Antica Focacceria was a main item in the Palermo episode, but not solely on account of its menu and atmosphere; Locatelli deviated from food to some darker moments dwelling on the Mafia and the Antica Focacceria’s stand against Cosa Nostra by refusing to pay the ‘pizzu’, or protection money. The restaurant was in fact almost alone in making this stand; a move which meant one of its two owners having to settle in mainland Italy, where you find Antica Focaccerie spawned in Milan and Rome. Far from dying, as some might have wished, AF and its chain is thriving.

Now, to our experience and the all-important food. 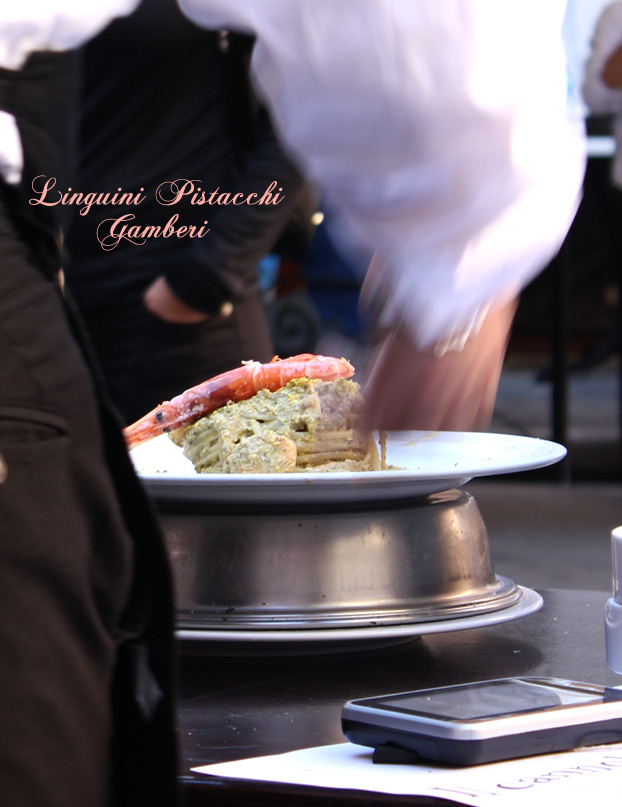 As we rounded the corner from the narrow approach street, Via Alessandro Paternostro, into the small square in front of Chiesa San Francesco, we saw that the entire piazza had been taken over by the Focacceria. Almost all of the space was devoted to its tables and perches for those who grab a take away and need to eat standing. I was reminded of Rick Steinville, a.k.a. the Cornish town Padstow renowned for the many eateries born of the once fish chef, now celeb chef of everything, Rick Stein.

Sunday, least of all a blazing hot one even though it was November, isn’t the best time to hit a very famous restaurant. But with no queue at the time we arrived (12.30) and two tables free, we eagerly caught the waiter’s eye and nabbed one, not having glanced at a menu nor contemplated prices. We were tourists willingly trapped. 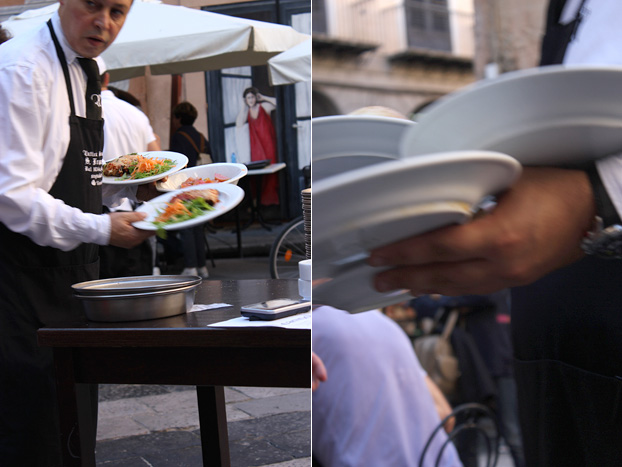 Determined to enjoy a slow food meal, ignoring any pressure to vacate a table as a heaving piazza-ful ‘queue’ formed nearby, we worked our way down the menu, starting with a mezze-style plate of typical Palermitan street food – mini arancini (deep-fried rice balls filled with ragu’ or mozzarella), mini involtini of sword fish, a melt-in-the-mouth roasted melanzane (aubergine) stew, what looked like fried tripe or spleen, and panelle (chick-pea fritters, which I did a fatter version of here). These whetted the appetite nicely for the next round of full-on flavours in our primi choices.

What fascinated me was the organisation going on around us. The kitchens out back, which must be enormous, were serving at a fast rate. Out front in the pizza deft kitchen hands swept past, dodging the hustle and bustle of waiting customers. They bore covered plates stacked high; at least one one occasion 10 high! Not a wobble nor crash. Lids speedily removed, order chits read, and waiters whipped off to destination tables. Inside, other customers were queuing for take-aways of its famed milza which is a panino filled with calf’s spleen, and some other innards, sprinkled with lemon juice. If you order a ‘sposato’ (married) it will be topped with ricotta too. The husband had this last time we were at AF; apparently tastier than it sounds.

I opted for a Sicilian original, ‘Pasta ‘chi’ i’ Sardi’ which was spaghetti with fresh sardines, fennel, saffron, raisins and pine nuts. The ingredients melted down to a sauce with still enough whole, identifiable bits in to signal what it was. I am not a great pasta eater, but I hoovered it down, not slow food style at all as it was so tasty. Husband had Linguini Pistacchi Gamberi (linguini with pistachio pesto and giant prawns); again, a fusion of traditional Sicilian ingredients in a truly sublime way. Junior had a basic pomodoro, basilico, mozza combo which for a boy who’s not a tomato eater also got eaten pretty smartly. The AF, as all trattorie we dined at in Palermo, has that Sicilian knack of taking the simplest but great quality ingredients and handling them equally simply to create sauces that speak volumes in flavour and which are near impossible to replicate at home.

We sadly passed on Secondi. But as the Focacceria’s roots are in popular street food, we didn’t need to feel guilty. I hardly saw any diners get to that course; all that is bar what seemed to be a large Palermitan family dining at a long table, definitely slow food style. They were set in for the entire afternoon celebrating someone’s birthday. Junior did get to the dolci though. 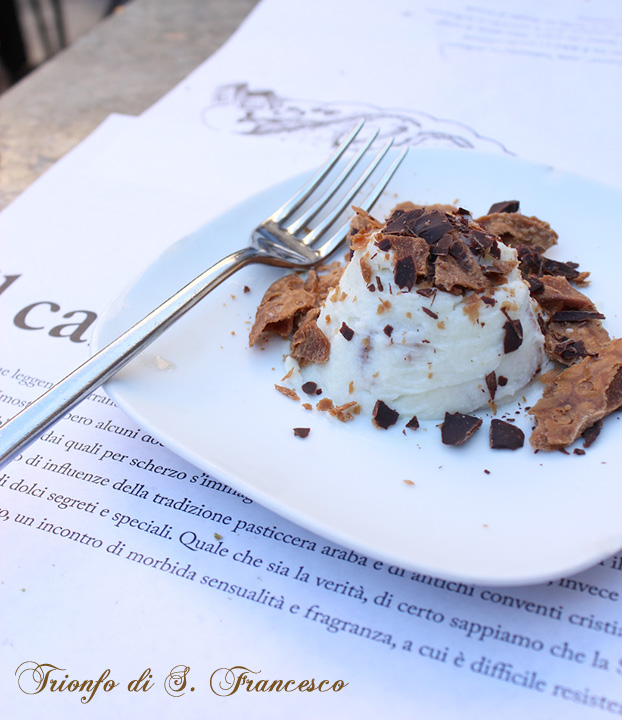 Right on cue, the waiter swept along past our table with a tray bearing an example of all the sweets on offer. J had a hard time choosing between delectable cannoli or cassatella. Cannoli won this time, but it was a close thing. I shared a lighter dolce of whipped, sweetened ricotta with crunchy chocolate wafers; another everyday Sicilian sweet that requires only a fork and a bit of chilling in a dariole mould, nothing more. Called a ‘Trionfo di San Francesco’, it’ll be on the Red Bistro menu next week!

How was our experience from seating to bill? Not the cheapest place in Palermo but not expensive either for the quality of the food and very good value compared to back home. All in all, my verdict is yes, it’s a tourist trap but not one to miss out on. I must check out its Roman sister restaurants some time. I can imagine milza going down well there as Roman cuisine is fairly gutsy stuff too!