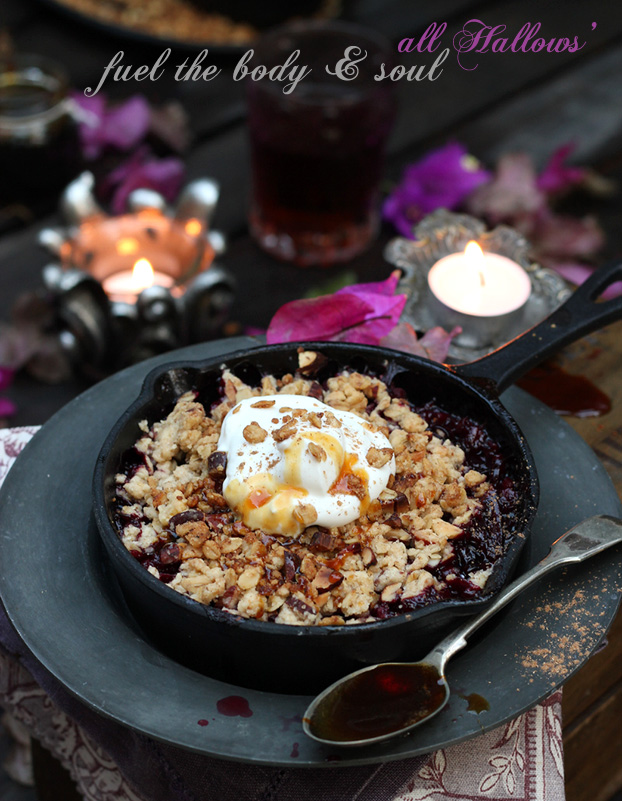 I am off to Palermo where I’ll be in heaven eating cornetti con crema for breakfast, crumbs and icing sugar dropping all over me and the floor of some small, hole-in-the-wall cafe-bar-pasticceria. Followed by some more pasticcerie pit stops later in the day to keep J happy plodding round Siculo-Arab-Norman churches. While I love the idea of Sicilian desserts, I don’t lust for them as much as J does. Both of us though share a love of English, no-nonsense puds, which come into their own from autumn through winter. 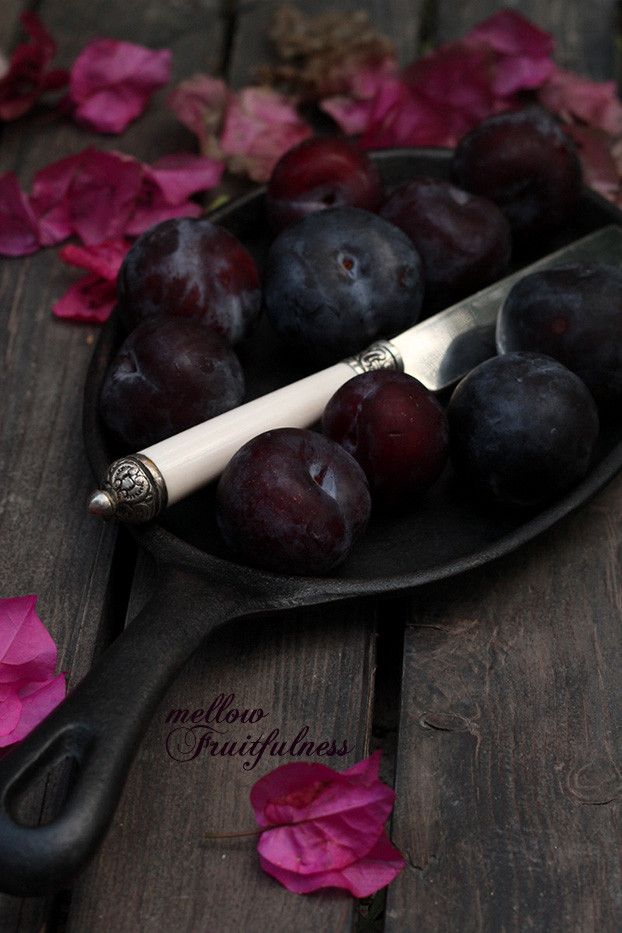 Plum crumble, or plum crisp as it’s known in the States, reminds us of my father’s Sunday lunches. It is also the first recipe J will make in his upcoming ‘Food-tech lesson’. So far, a month into school, he’s not cooked anything in the lesson and I am not sure what the food tech syllabus is supposed to be about. I do remember apple crumble being on my Brownie Guide cookery badge reqs though as it’s a starter recipe – basics of pastry making etc, and learning how to peel fruit without slicing fingers. 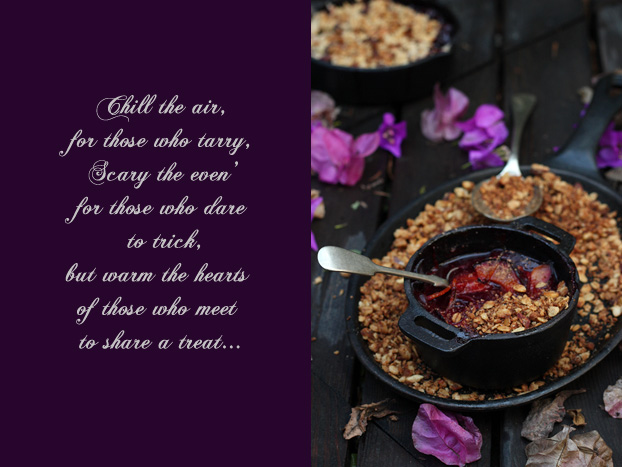 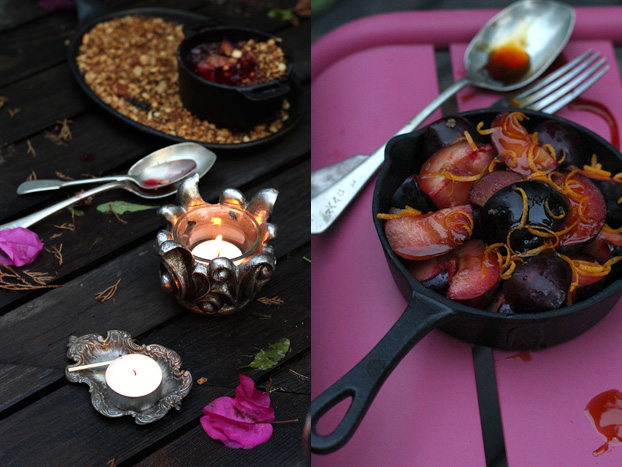 With Hallow’een missing from my menu as we fly out (no ghostly or ghoulish cupcakes on the menu today), I’ll pre-empt the UK’s 5th November Guy Fawkes ‘bonfire’ night celebrations with this crisp which can be made stove-top or on a campfire crisp. We used to make something like this on Guide camps; I remember one of mine slipping off the wobbly griddle down into the embers below. Yes, in those days, we did cook over an open wood fire in a field – a set-up that wouldn’t pass any safety standards today of course for kids’ camps but it wasn’t half fun, as they say! 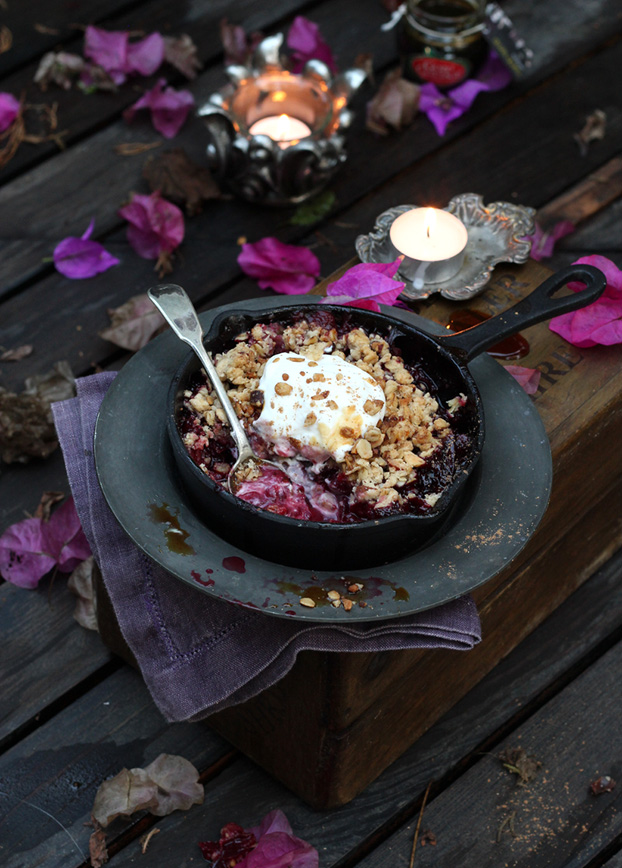 Plums don’t make many entrances in our household. Malta can grow plums, although I tend to associate them with cooler climates. What little there is of the local plum season seems well and truly behind us as my glance round the farmers’ market proved yesterday. Fruit of any kind was in short supply. I saw black field grapes full of pips, and the odd melon. But nothing enticing. The supermarkets are importing plums from Italy; I had a choice of three types – these dark blue-black ones, or hues of red to pink on two other varieties; not labelled so I can’t tell you what they were. I went for a darker dramatic skins in honour of All Hallows’. 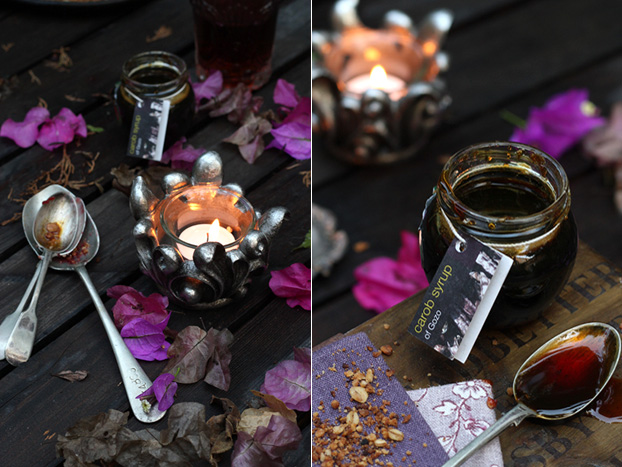 As with the breakfast muffins earlier this week, I’ve added some spices to evoke autumn, and zested orange liberally all over before roasting the plums. I’m giving the end of October’s meals a seasonal slant as today is the first day we’ve had an autumn storm for a good month and a half. Plums are generally under ripe when they arrive in Malta and can go mushy without ever ripening so I tend to roast them up with Carob syrup from Gozo which adds a deep earthy, treacly flavour that goes so well with plums. Autumn, bring it on! 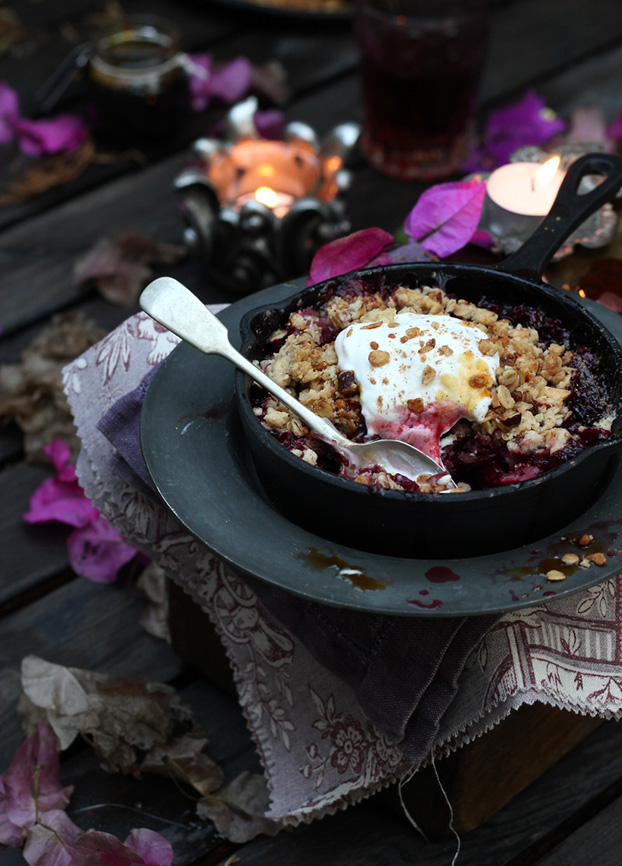 Enjoy the Treat of this plum crisp; the trick lies only in cooking it over a flame! While we used to rustle this up over a fire on Guide camps, you’re better off with it in the oven and carrying it outside to your feast of friends.

I used individual cast-iron pans for hob to oven use. You can just use a regular dish for oven alone.
Serves 4-6. 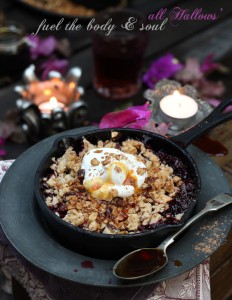