A super size photo for a larger than life ice cream. 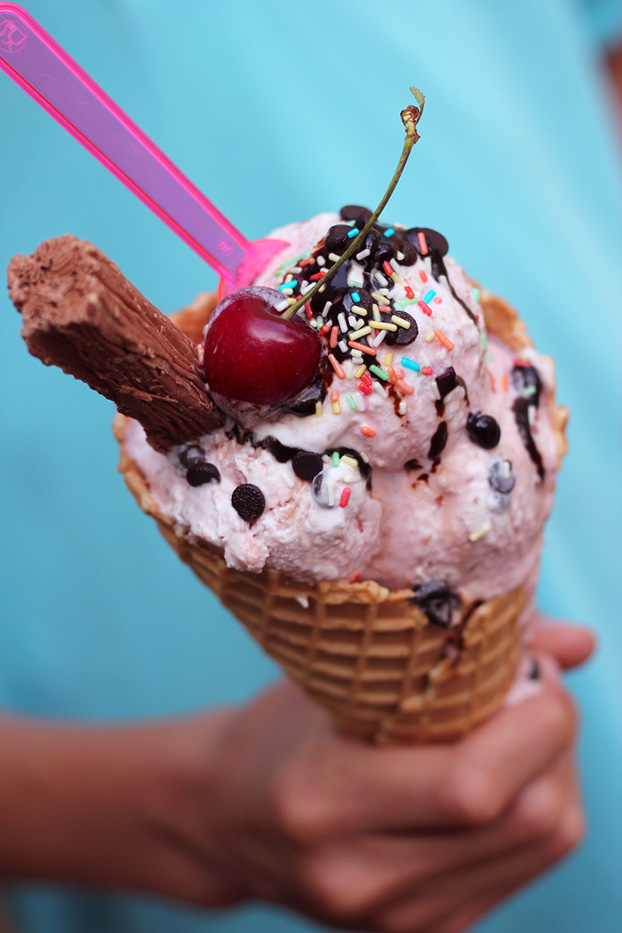 We’re a long way from any forests in Malta, let alone the Black Forest. But we can be near to the ingredients of a Schwarzwälder Kirschtorte. This ice cream is a hark back to the ’70s’ (and my) love affair with Black Forest Cherry Cake and is deliberately OTT with its piled piped cream, choc chips, squirt of sauce, boozy nip of Kirsch and cheeky cherry topper. 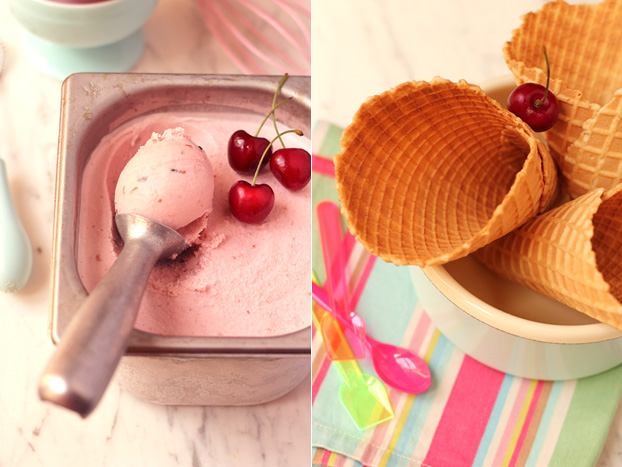 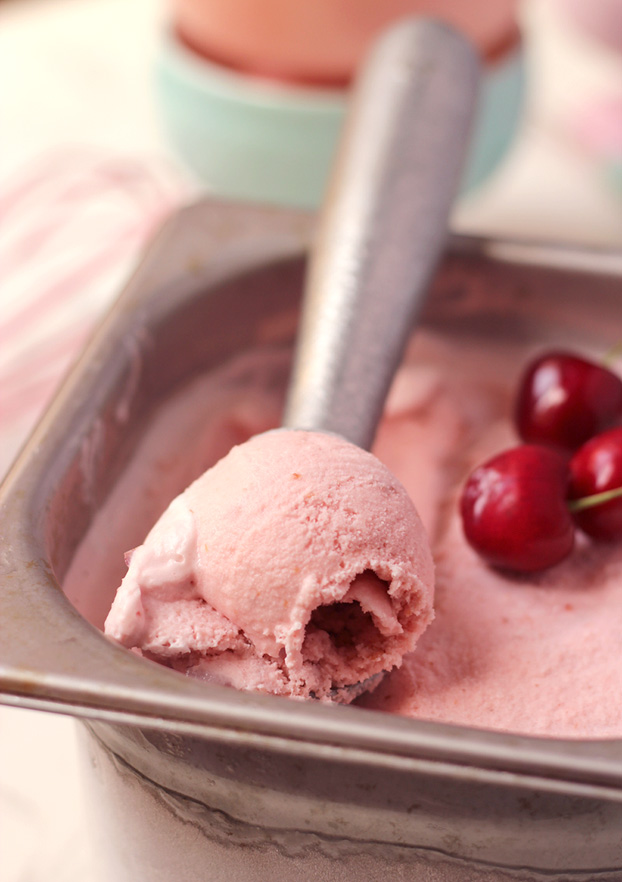 Apparently, the BFC is making a comeback. It certainly is in our household as Jacob squealed with delight on seeing his charge for this photo shoot! He got to eat it after a few rushed snaps as a humid afternoon was turning ice to cream in split seconds. I rather like the slapdash gloopy cone pix though I did have a more styled, adult dinner party ice cream shoot in mind; one set to recall those social ‘do’s my parents had (the sort that involved prawn cocktails and Snowballs) when I was around 10, Jacob’s age now. However I plan to shoot a recipe in advance, on the day, my or the day’s mood is different and the food under the lens takes on a whole new meaning. 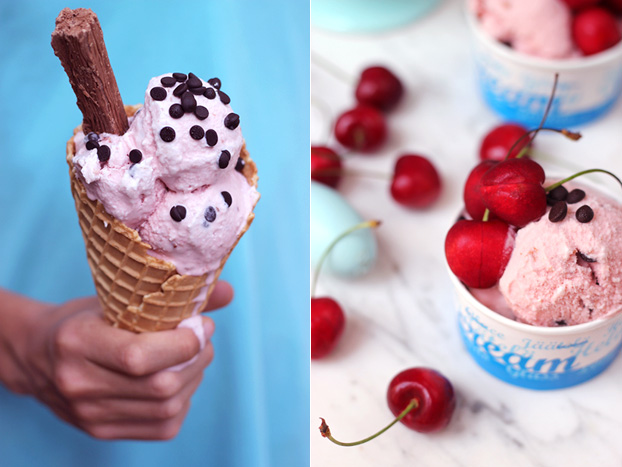 Black Forest Cherry cakes were a thing of my childhood, so how can I deny Jacob a chance to savour its flavours in his preferred form – an extravagant coneful – after he’s played ball holding (for dear life, it looks like) a wobbly ice cream that’s dripping down his arm? The way it came out makes it look so kitsch (to borrow another German untranslatable word) and also very Sicilian at the same time. A Black Forest Cherry Cake is precision-made engineering layers of cherries, choc sponge and cream; while a gelato from the island that is THE home of gelati is about pastel colours in messy scoopfuls topped with hints of neon pink, blue and green and chocolate sauce and cream – every kid’s dream!

“Why don’t you make Cassatella ice cream mum?”, he asked, looking more than ‘ein bisschen’ sceptical of the cherry ice cream, which probably sounded too grown up. Cassatella is his all-time favourite cake, and Sicilian. My son may have both northern and southern European roots, but when it comes to desserts, southern win hands down. Black Forest cherry cake isn’t in his venacular, or wasn’t til this ice cream. Flinging more chocolate chips, sauce and hundreds and thousands on it, and some squiggles of instant cream won him over. He’s a good actor, so put on his ‘errm, not that keen voice’ but then pronounced it was the best (homemade) ice cream he’s tasted. Praise indeed from a sweet-toothed ice cream parlour king. 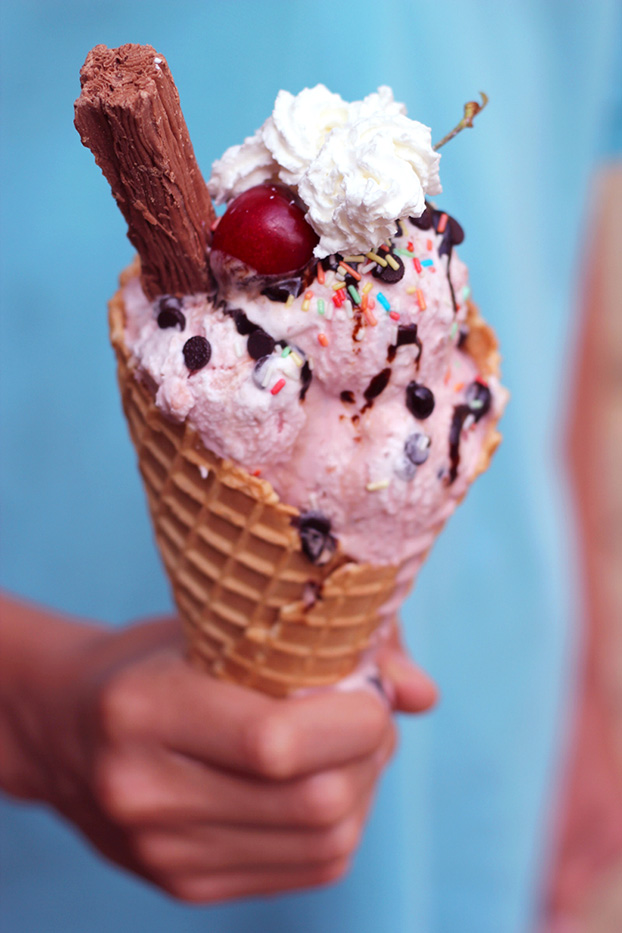 It’s stone fruit season big time in the southern Med and cherries have been making their way to our shelves for around two weeks. Cherry ice cream it was then as a couple of hot days over the weekend spelled summer (still not quite here yet this year though) and the end of baking and hot ovens. Cakes out, ices in. Now to try that Cassatella one as requested! Expect a couple more interesting ice cream concoctions before month’s end. 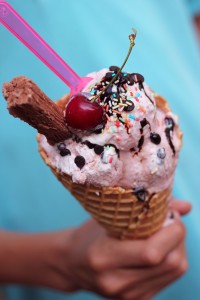 Print
Prep time
3 hours 30 mins
Total time
3 hours 30 mins
Serves approx 10 portions. Ideally, use an ice cream maker. The small amount of alcohol in this ice cream ensures it remains a soft scoop, so you can serve straight from the freezer. Serve with any or all of the toppings listed below to give it more of a Black Forest cherry cake look and taste.
Author: The Red Bistro
Serves: 8-10
Ingredients
Method
3.2.2885
« Mais oui, Madeleines!
Sardines for a snack »