Villa Bologna is known to most in Malta as a wedding venue and it does have an amazing, formally laid-out Mediterranean garden ideal for functions. Lying tucked away behind grand walls and hidden from casual passers-by, Villa Bologna has a lot more to it than pomp and circumstance, even though it’s had its fair share of that in Malta’s history. The Villa was built in 1745 as a dowry for a much-loved daughter marrying a count of Bologna; and in the 20th century, it was the home of Lord Strickland (‘Head of Ministry’ – a title more or less like a Prime Minister, but under British colonial rule). But for now, something rawer, earthier and more industrious entices Red Bistro – Villa Bologna’s ‘Peter Rabbit-style’ kitchen garden and its vast veggie plots which are a cook and gardener’s paradise…

From its more formal face… 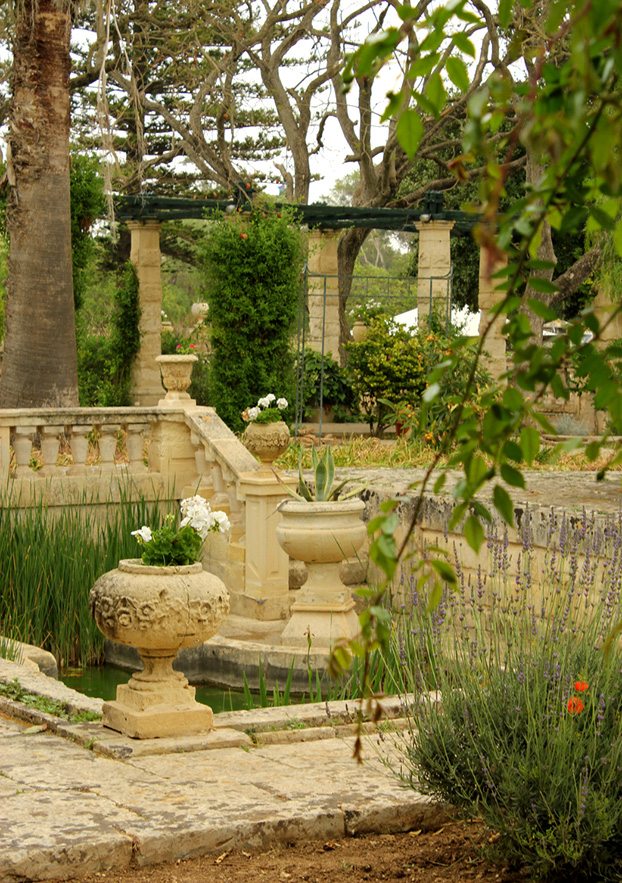 behind walls and a wrought-iron gate… 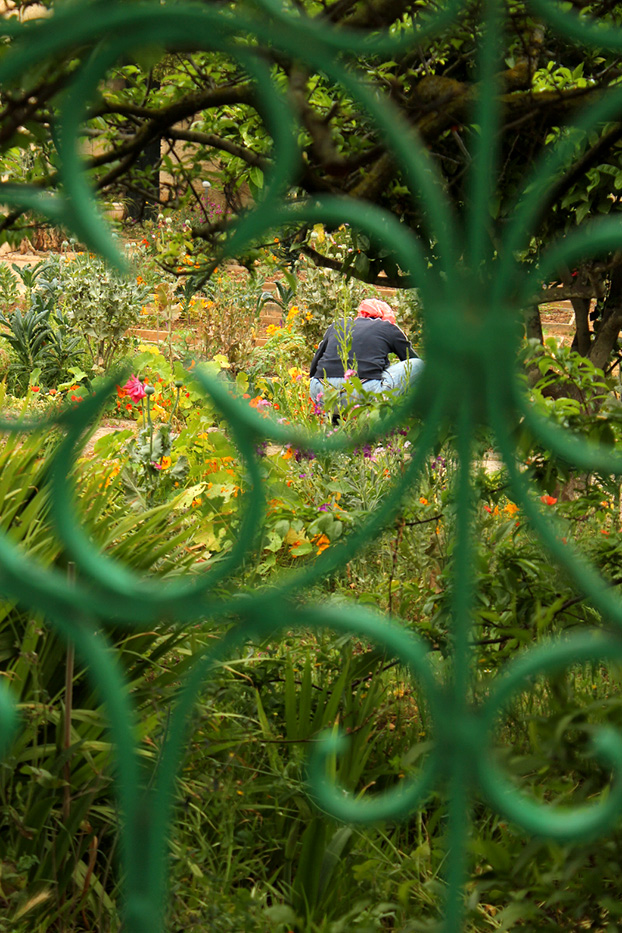 …it’s home to a small, dedicated team that’s pioneering alternative ways of growing produce; pesticide free and based on old-fashioned 19th century kitchen garden practices. Vegetables, fruit trees, herbs and flowers and more all mingle in a riot of colour that’s a haven for bees, butterflies and birds (which have their role to play keeping those pesky slugs, snails and greenfly at bay). 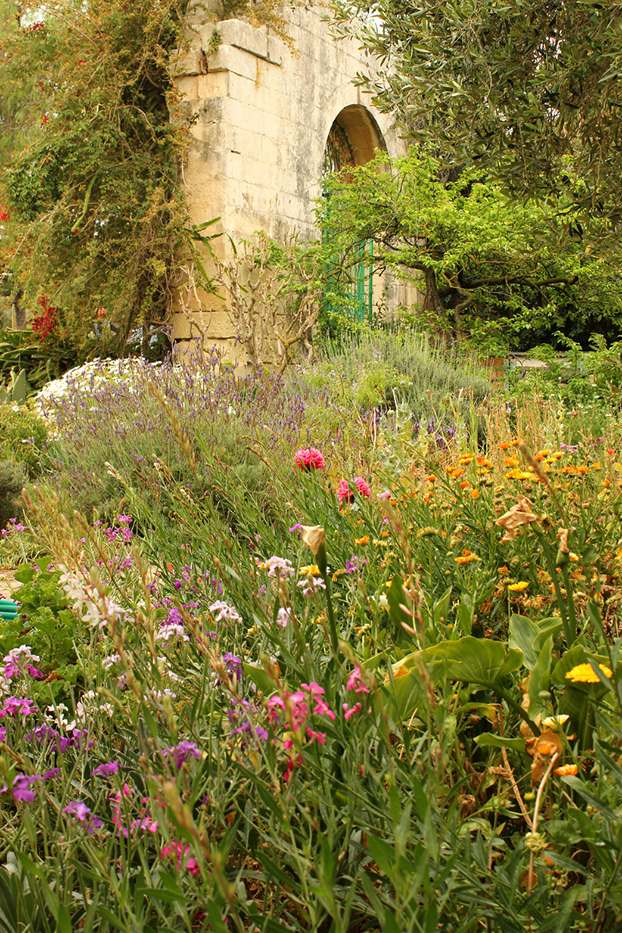 If you’re in Malta, Villa Bologna’s vegetable garden is the place to go for some unusual ingredients. I hope my photos will make you want to visit and help support this inspired initiative that’s a labour of love for the Villa’s owners – the de Trafford family – and kitchen garden staff Emanuela and Amber and volunteers. If you’re not Malta way, you’ll still be able to enjoy the recipes I’ll be posting based on what’s in season at the Villa. For now, I’ll let the photos do most of the talking. Details on the Villa and how to buy from its kitchen garden are at the end of the post. A first batch of recipes in the next week.

Veg and herbs are left to bolt so the seeds are saved for next year’s harvest. What struck me was that we rarely know what vegetable flowers look like as never see them in a garden going through their life cycles. Here, Amber starts the fight to dig out a giant carrot so the bed is freed up for spring crops. 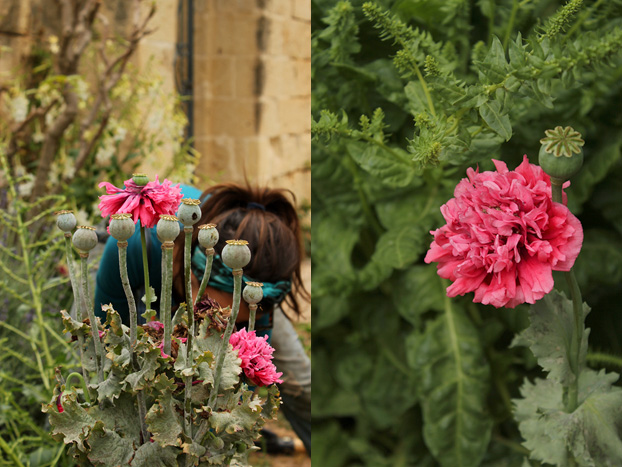 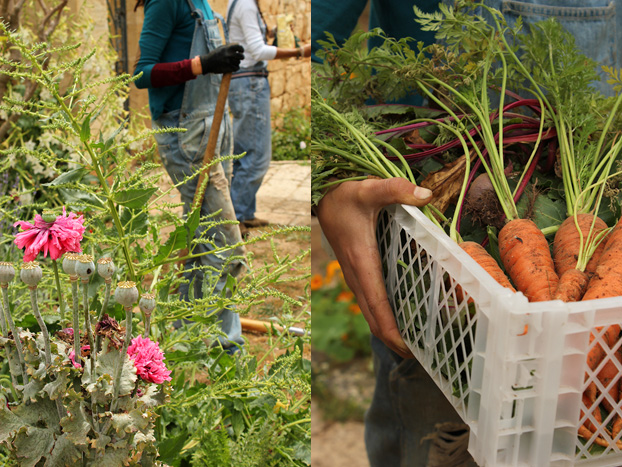 I took a bunch of camomile, poppies mixed in! 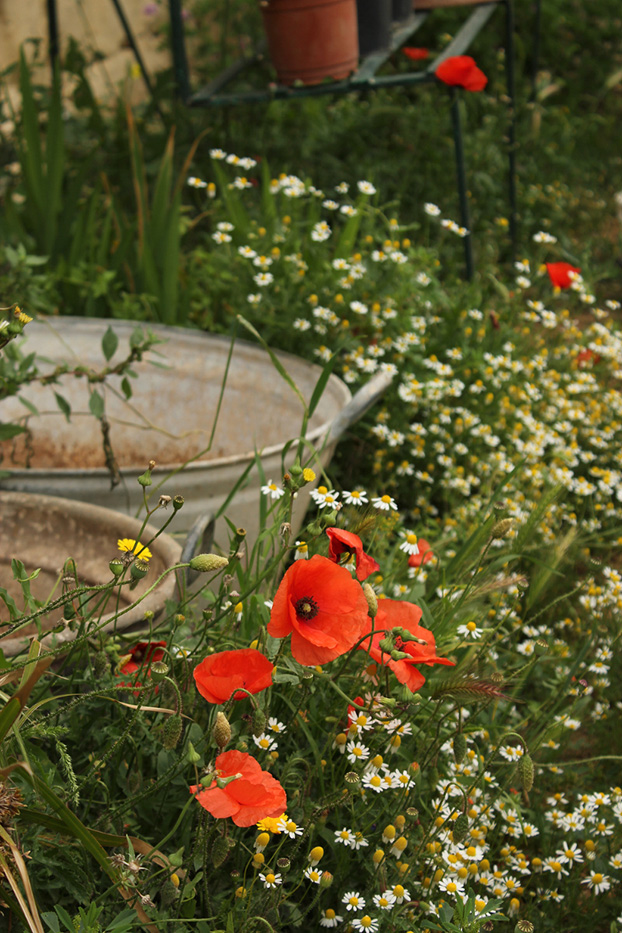 and more poppies, this time in with peas and beans against a backdrop of ancient Cyprus trees… 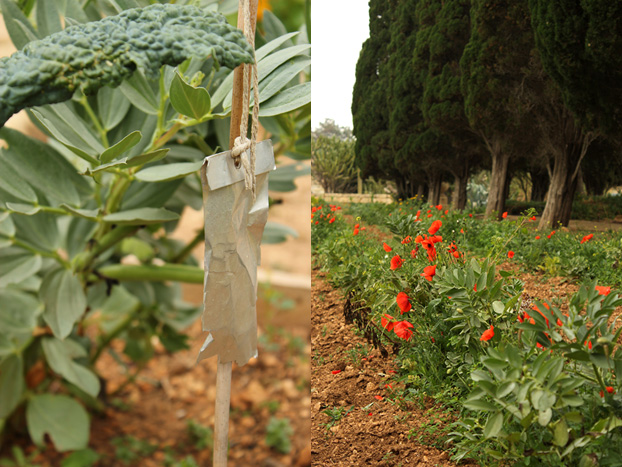 On the way back from the field, I came across free-range chickens and avocados (not plated but happy, healthy and growing!). Villa B seems to try its hand at anything, even the most difficult of fruit trees to grow. 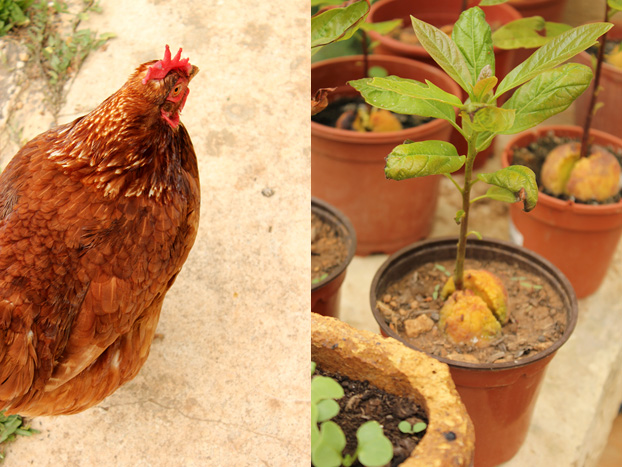 Your veg basket, which Emanuela will pack up for you with seasonal veggies of your choice, is bound to have a good bunch of herbs in it as well (See details end of article on how to buy). 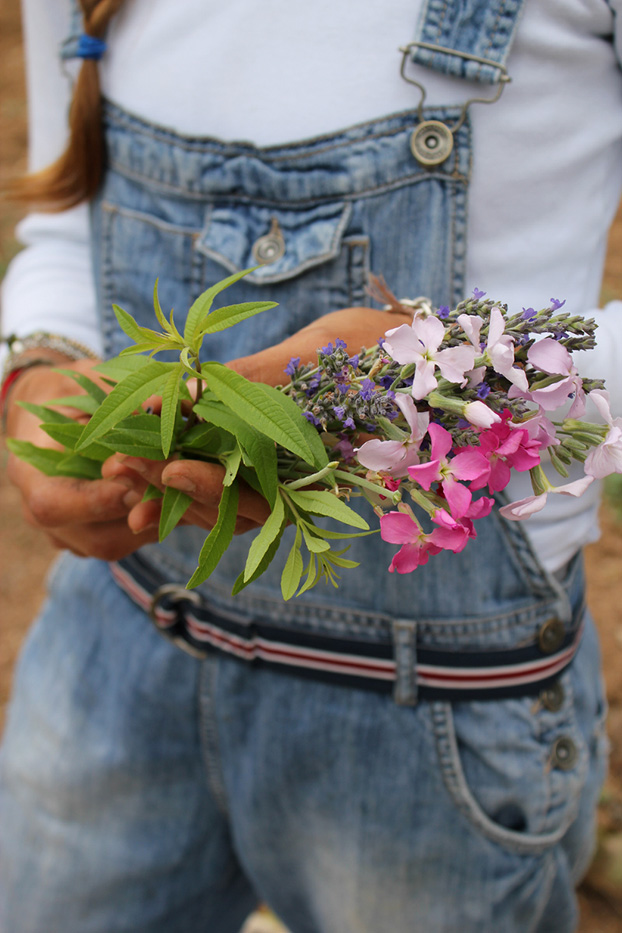 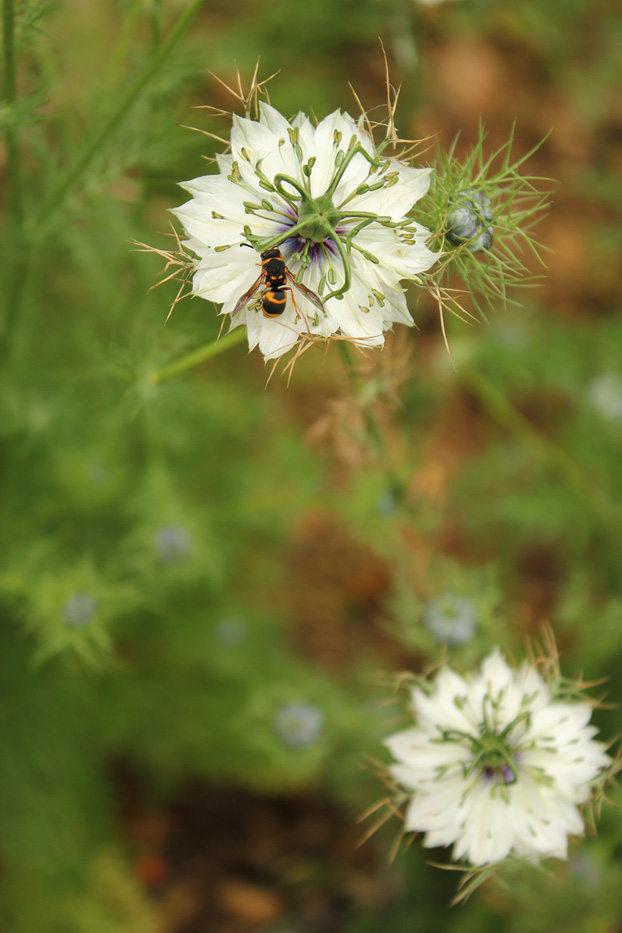 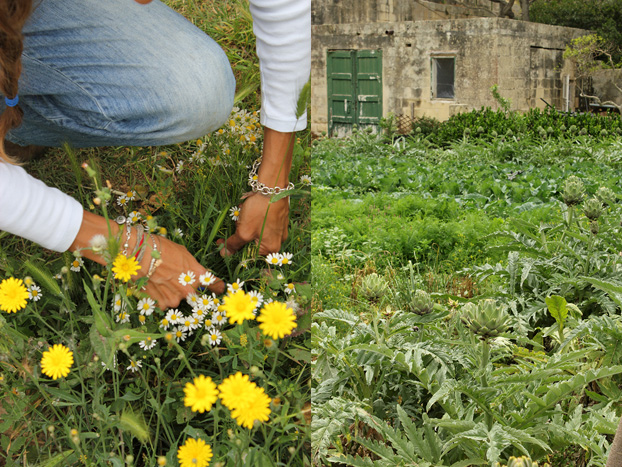 Emanuela (below, far right), who returned to Malta after several years overseas in the hospitality and hotel industry, opts now for an outdoor life at Villa Bologna gardens, sharing her days with musician Amber who helps out part time. 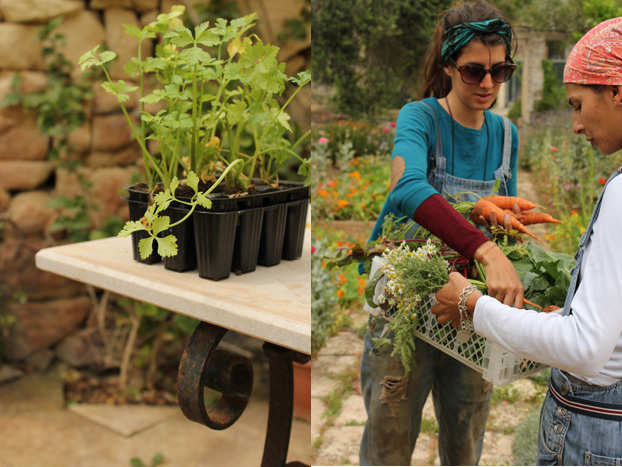 Thanks to Jasper de Trafford, Emanuela and Amber for showing me around; not to mention the rest of the hard-working team behind the scenes on this inspiring ‘work in progress’. I’ll be reporting on the crops at Villa Bologna as the seasons change, and bringing you fresh recipes they inspire.

To buy produce, we advise calling or SMS-ing beforehand to chat about what’s in season and perhaps to ‘book a basket’ of your chosen vegetables in advance. This way, you can plan menus and the Villa team can pick and have it ready. The garden operates very much on a seasonal basis growing small volumes of each crop.

Garden tours & Pottery Shop:
The garden (tours Euro 5) and the shop (with its hand-made pottery) are open on weekdays during regular working hours (9am – 5pm). Call at the pottery shop entrance for garden tour tickets. Full details of where to find Villa Bologna and more on its functions and gardens are on its website.