Mushroom recipes tend to be for soup and quiche. You find mushrooms tossed as an after thought into casseroles or fried up for breakfast too. But there’s a whole rich, deep earthy-flavoured world of mushroom possibilities out there. These pasties are made for mushrooms.

With two trays of mushrooms lingering in the bottom of my fridge with only a day’s more life in them, I had to think through my mushroom repertoire quickly. Not that it contained many recipes; J hates mushrooms so no way can we ever hide them in a family weekday supper. They needed a suitable warm lunchtime snack idea for his very chilled to the bone parents. 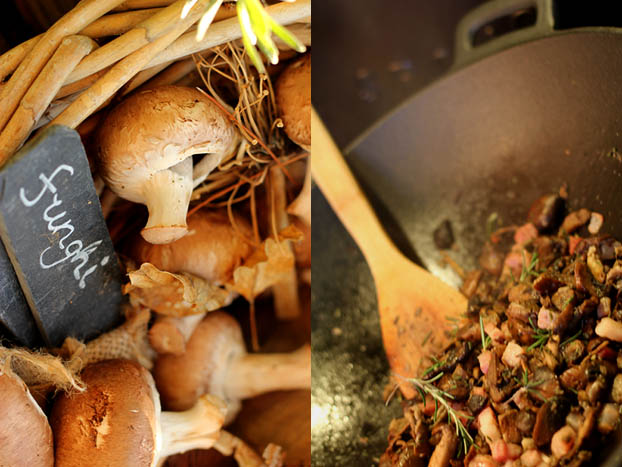 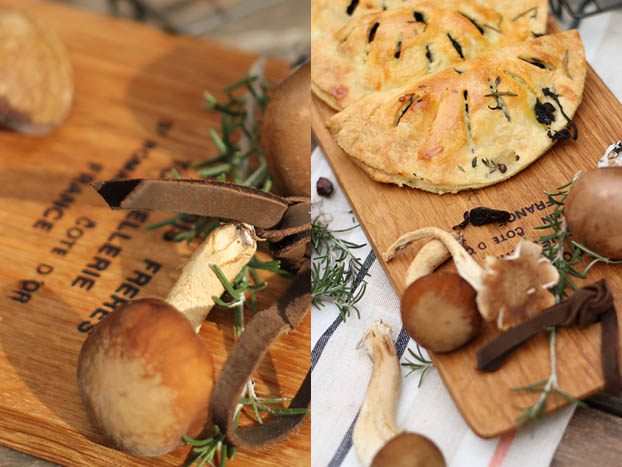 What do we see munched as street food midday in Malta? Pastizzi – or pasties (the nearest we get in English to them). Traditionally of rather greasy flaky pastry and filled with ricotta or mushy peas, pastizzi are synonymous with Malta; so much so that they crop up wherever there are Maltese émigrés. A shortcrust and less greasy pastry filled with a gutsy mushroom, lardon and anchovy combo sprinkled with rosemary and thyme takes the pasty to new heights, and met with Maltese husband’s approval. As only we two were eating them, our other fave flavour, anchovy, could go in too. 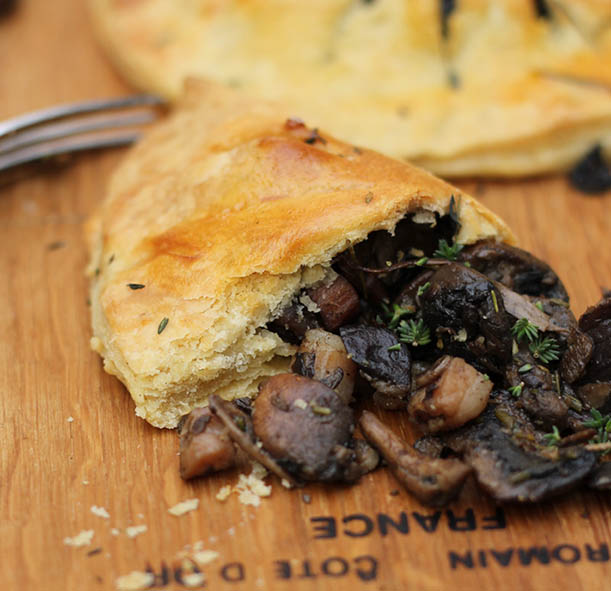 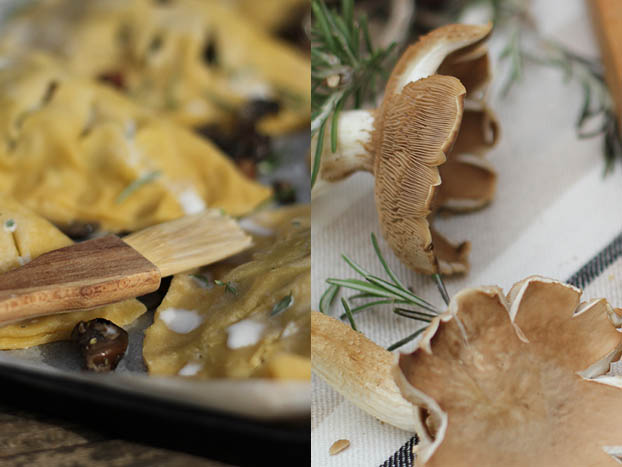 I am making these again in a couple of days as party niblets, but far smaller (using an espresso size rather than tea cup saucer to cut out the pastry discs).

makes 5-6, at tea saucer size with 200g pastry
small packet of lardons or pancetta (speck or other flavoursome cured ham)
four good handfuls of mushrooms of choice, cleaned and sliced
2 garlic cloves, crushed
rosemary sprigs – some chopped finely to add to mix, others to garnish
knob of butter
2 tbsp olive oil
anchovy fillets (optional and according to taste)
200g shortcrust pastry – ready made or use this recipe (see end of post).
fresh thyme to sprinkle over on serving

Crisp up lardons over a medium-high heat in a heavy-based frying pan or wok. Remove the lardons, then add a knob of butter (and some olive oil, if needed) before tossing in the sliced mushroom, anchovies, garlic, chopped rosemary. Turn heat down to medium. Cook mushroom til the juices run and the mix dries out but make sure it doesn’t burn on the bottom, so toss occasionally. Remove from heat, add the lardons back in, set mixture aside and leave to cool to room temperature.

Meanwhile, pre-heat oven to 180°C. Roll out pastry (previously chilled in fridge for half an hour if homemade) to around 3mm and cut out circles using a saucer as a template. Place a couple of good spoonfuls of the cooled mushroom mix onto the discs, just off centre, and brush round the edge of half the disc. Carefully fold over the disc, press edges down with a fork or thumbs to seal. Make an airhole or some narrow slashes in the top of the pasties and brush their tops with milk and/or beaten egg. Bake on a tray lined with greaseproof paper for around 15 minutes or until lightly golden on top. Serve and eat immediately or reheat gently to serve later though can be eaten cold as well. Mini ones make delightful bite-sized dinks’ party niblets.

Our friend Marilu’ has an interesting line (and business) in alternative pastizzi. Check out her Pastizzi Gourmet.