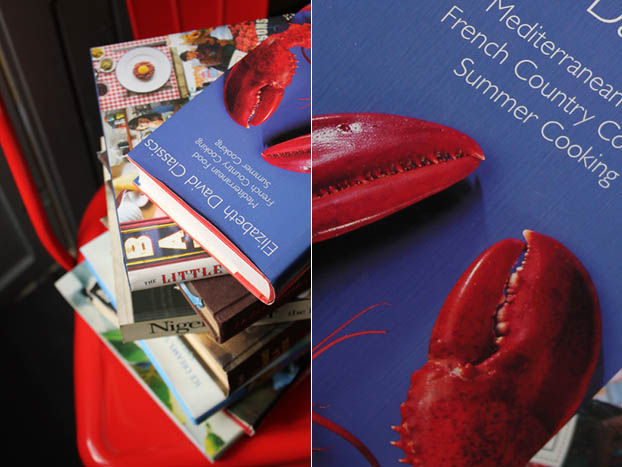 I live online and gloat over food pix on blogs, Pinterest, Flickr and foodie sites, but I still love cookery books. My shelves groan with them: some are without pictures but are much loved and food splattered all the same; others are choc with photos and are more coffee table feasts for the eyes than used for their recipes. All are inspirational and yes, my Xmas wish list has room for plenty more. I’ve done a round up of my top ten for this Christmas. Not all are newly published (celeb chefs come out with an obligatory pre-Christmas book to catch the market at the right time), but all are seminal in their individual ways and worthy of my shelf space. Heaven help if I have to move house.

Jerusalem: – Yotam Ottolenghi & Sami Tamimi. The men behind Ottolenghi, the cookbook and chain of restaurants, were both born in Jerusalem the same year – one in the Arab east, the other in the Jewish west – and met only in London years later. This book celebrates their shared passion for their home city, and explores its mosaic of cuisines that have constantly exerted a strong pull on their culinary careers. So much more than a cookbook.

The Kitchen Diaries II – Nigel Slater. I’ve had Kitchen Diaries (1) on my shelf for several years. Love it! Nigel Slater is a food writer foremost, to my mind, and one who manages the impossible. It’s incredible how the seemingly mundane – trip to the market, for instance – can be spun into vivid vignettes which you share with him. Diaries 2 is of the same mould, and I am as eager to read this as a book at bedtime as use for his very down-to-earth recipes that make my suppers sing.

Limoncello & Lemon Water – Tessa Kiros. Why do cookbooks these days seem to be written by people with incredibly well traveled lives? Perhaps cuisine is the key to discovering a culture’s heartbeat? Tessa Kiros was born to Finnish – Greek-Cypriot parents, grew up in South Africa, and then studied and traveled her way round the world before marrying an Italian and settling in Tuscany. Hence this latest book of hers. This one includes some wise words and recipes of matriarch ‘nonnas’ of her adopted homeland. A book to covet not just cook from.

Under the Walnut Tree: Good ideas from our kitchen – Anna & Fanny Bergenstrom. A mother-and-daughter collaboration (they are big in Scandi countries) curate an eclectic mix of recipes that are surprisingly not just Scandinavian. It is organised by ingredient (cardamom, chocolate, cinnamon etc) and includes influences – thanks to far-flung family – from France and Chili, as well as recipes from closer to home – their native Sweden, and that walnut tree.

Pomegranates & Roses: My Persian Family Recipes – Ariana Bundy. This is a beautiful book, so coffee table status. But not only. If you’re keen to explore middle-eastern cuisine, then Ariana Bundy, an American-Iranian, makes Persian cooking enticing basing her recipes, importantly, on easy enough to find ingredients.  Its narrative doesn’t overdose on nostalgic family memories; it is a solidly good cook book with recipes going well beyond her family’s sphere.

The Perfect Scoop: ice creams, sorbets, granitas & sweet accompaniments – David Lebovitz. This is an ice cream bible. Of course, to put this on the wishlist, you’ll need to receive a present of an ice-cream maker too! But get the book first, and be amazed at the infinite variety of life’s simple pleasures you’ll enjoy. From the weird to the wonderful, goats cheese ice cream to rice ice, all are possible in Lebovitz’s easy, but comprehensive guide.

Small Plates & Sweet Treats – Aran Goyoaga. Aran is a food blogger, stylist and photographer of Basque descent now living in the States who has developed a niche in gluten-free family cooking. This, her first book, has delightful and delectable smaller plates, ideal for families with young children who don’t want massive portions, but to have their taste buds tickled and be tempted to try a variety of foods and flavours. Her photos are stunning, by the way!

How to Bake – Paul Hollywood. Having watched several Great British Bake-off episodes, I can say that here is a man to make even the most pro-home baker quake in their pinny. If you’re a victim of ‘soggy bottoms’ (pastry that’s limp and wet not crisp and cutting edge), then Paul’s book steps in to not quite save the day (null point given for failures) but at least help you get it right next time.

Sugar, Salt, Smoke: how to preserve fruit, vegetables, meat & fish – Diana Henry. I have developed a passion for preserving starting with bog-standard marmalade making each New Year. Diana Henry takes us well beyond the basics of conserving and preserving going from lemons to fish. How about trying your own baccalà (salt cod)? A must-have for anyone interested in making the most of a cheap glut of more or less anything!

The Italian Baker: Classic Tastes of the Italian Countryside – Carol Field.  Definitely one for the artisan, home baker who loves the challenge (and pride) that comes with making their own, and impressing guests.  I’ve been a flat bread maker for years, flipping them on the BBQ, but this book will grow my repertoire to the airy heights, I hope, of risen breads too. Carol Field has managed to pull off a serious yet readable guide to just about every shape and style of Italian bread.

What’s your cookbook recommendation for Xmas 2012?