For those who don’t like limp lettuce, this is the salad to entice you back to ‘rabbit food’! I call this one ‘six-pack’ salad as it packs the punch of six autumn flavours in goat cheese, walnuts, radicchio, pear, pomegranate and fennel. With a few leaves of ruccola for peppery-ness. 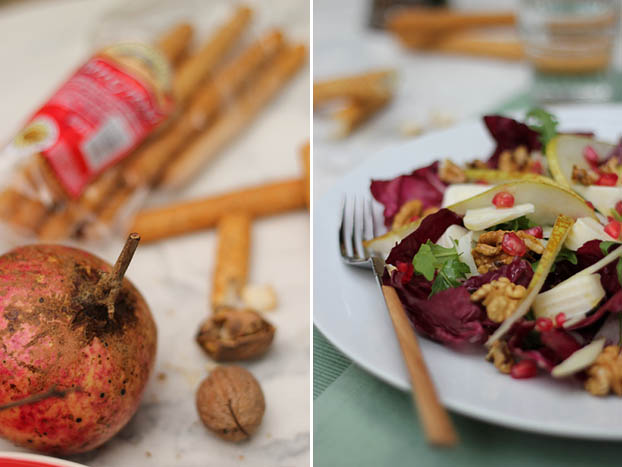 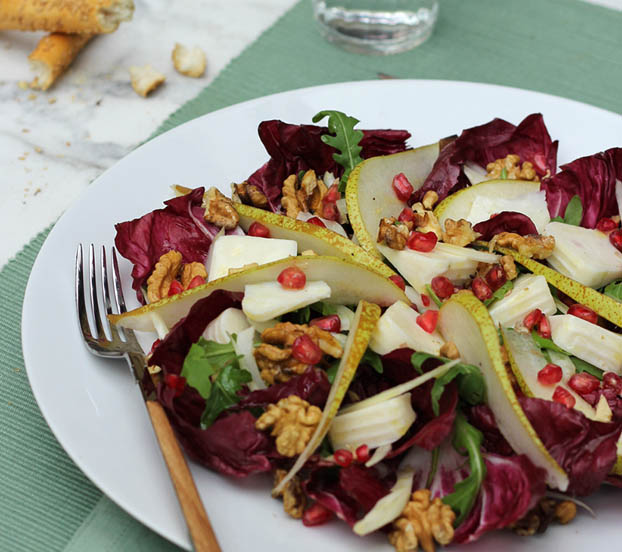 Salads aren’t just for summer. Autumn through to winter’s crunchier veg makes them even more tempting than the ‘wet lettuce’ varieties served up in our hot summers. With goat cheese and walnuts, I found this surprisingly filling for lunch, even without something meaty grilled and plonked on top. As the husband and I work from home most of the time, we tend to vacate laptops hurriedly and slap some ham, salami or cheese between two slices of ciabatta. Carb is not the best lunch for body or brain, so I’ve been keen lately to wean us on to salads with a dash of protein for a light lunch that won’t leave us craving more carb an hour or two later. 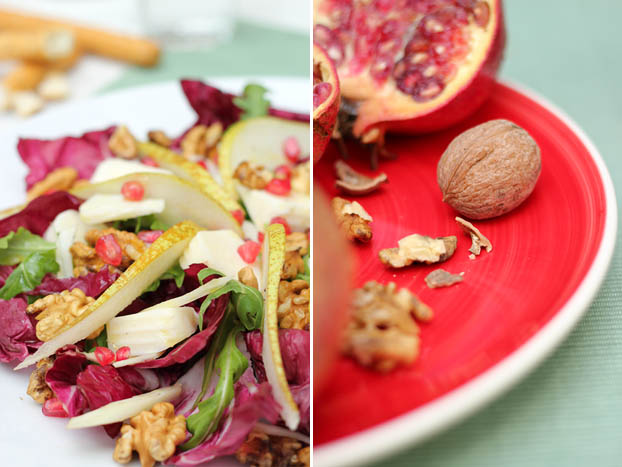 As it’s the end of the week – the day I like to clear the fridge before the weekend shop – I came across quite a bit of lingering, but still useful veg. This wasn’t a planned salad by any means, but with a few minutes slicing the assorted veg, and cracking nuts (conveniently brought home in my son’s ‘San Martin’ bag from school this week), I came up with six flavours that complemented each other and were redolent of autumn. A drizzle of a utilitarian olive oil and lemon dressing and it was done in five minutes flat. I allowed myself a couple of grissini as a nod to carb!

Finally, if anyone knows what the significance of St Martin’s day is let me know! After all these years in Malta, I still can’t get an answer as to why it’s celebrated and what the little bags of nuts, oranges, dried figs and honey rings have to do with it. J is just happy to see Christmas food come early, though he eats only the honey ring and leaves me the healthier options among the goodies!

« A November Sunday tea
Tagine pot gets a date »